Thoughts on Black History Month in the US 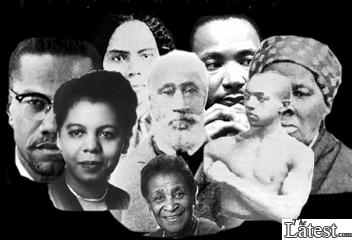 I can see it now .... all across the United States of America and around the world, where Black History Month is celebrated in February, teachers informing their students that not everyone can do a report on Barack Hussein Obama Jr., the first African American elected president of the United States.

In many ways, his story is the perfect narrative around which the history of African Americans can be explored and coalesced, being the offspring of a Black man from Kenya, with his father, the son of a goat herder and his mother, a woman from Kansas, who happened to be White, whose family's history reveals the family's ownership of enslaved African people.

After the election of President Obama, which was achieved by Americans of all races, ethnic backgrounds and demographics voting for him as their choice for president, many were admittedly struck by the enormity of this monumental event in American history, cognisant of the price paid by so many before this action could even be realized. Still others professed an inability to grasp why this was such a great accomplishment.

The key to why some Americans may have been unmoved by this historic achievement may lie in a lack of knowledge of the trials of African Americans in America, with most narratives beginning with the majority of African Americans having ancestors that were enslaved, people who were once known, in polite terms, as Colored, Negro, Black, Afro-American, with all of the above mentioned appellations having been, in most cases, bestowed upon them, each designation representative of various historical periods with the passage of time.

For almost two decades, as I sent my daughters off to school each morning, I was often struck by the immensity of such a perceivably simple task.

As an American of African descent, reflecting on the history of America's past, and to be frank, for the majority of citizens in the nation as well, this was a great achievement.

There was a time when education was not available to all in the United States and in the case of African Americans, for over two hundred years it was illegal to educate Black people.

A Black historian named Dr. Carter G. Woodson, the son of formerly enslaved parents, conceived of Black History Week in 1926. My generation, beginning grade school during the 50s and 60s, was the first to embrace the attempt at the incorporation of those mostly unsung heroes, personalities and events into our studies in our classrooms. In 1976, that custom was expanded to an observance during the entire month of February.

Arguably, with the exception of Native Americans, the original caretakers of this land, no other group of individuals had been so thoroughly relegated to the dimly lit corridors of American history.

Each year, when I reviewed my daughters' textbooks all throughout grade school, the institution of slavery, an inhuman system that used kidnapped and enslaved Africans to build and enrich what later became known as the United States of America, with slavery becoming an established custom in North America before the official founding of the United States through legislated laws for almost three hundred years, this financially profitable business event was condensed and streamlined, as subject matter, into less than a chapter.

The institution of chattel slavery, with many of its practices, was in place during the writing and signing of the Declaration of Independence in 1776 and existed for 89 years after the acceptance of this document.

The formula for delegate representation in the new government, to be applied in regard to slave holders and recorded in the U.S. Constitution, a document ratified in 1788, chose to denote acknowledgment of enslaved persons as three fifths of a man for this purpose, appearing in Article 1, Section 2 in the document.

After centuries of enslavement ended, after the Civil War, Black Codes were introduced throughout the former slave holding Southern states to restrict the movements of the newly freed, formerly enslaved.

After the period known as Reconstruction ended in 1880 and with the withdrawal of U.S. federal troops from the former seceded southern states in 1887, troops that provided a measure of protection for the newly freed in the states that had been fighting to retain the system of chattel slavery, after a deal was struck between the Republican and Democratic Parties and the imposition of the unsightly customs of Jim Crow Laws, segregation and events that continued to stain the historical record,in an attempt to assuage the sensibilities of the majority of Americans, it was necessary to commission the painting of an idyllic scene, starting anew with a fresh canvas.

This portrait was complete with happy, child-like and contented Negro slaves, less capable than their enslavers, with the consciences of many in the nation throwing out the original portrait of American history or at least putting it away from public view, providing plausible deniability for those choosing to avoid the ugly truths, while promoting the genius and perseverance of the rest of society.

This doctored offering emerged as the official portrait, displayed to the world, attempting to alter one of America's darkest periods in history, although truthfully, it was an abstract, not a portrait, with 'abstract', in this instance, meaning 'insufficiently factual'. Sadly, that doctored abstract is still dusted off and displayed, by some,?from time to time.

The majority of individual stories of the brave and not so brave enslaved persons, by the very nature and practice of institutional slavery and the effects and consequences endured by those due to discrimination after enslavement, have been relegated to faceless, nameless entities. Although the deeds of some have survived to be told during Black History Month, countless millions of others remain unknown and untold.

During the past almost sixty years, members from all segments of American society, of all colors, have worked toward aiding and improving this country as it has laboured to address the many overt actions that had prevented all of its citizens full participation in the past, so much so that, on November 4, 2008, the country elected its first African American president, 143 years after the official end of slavery.

The revised curriculum in the 60s, with the observance of Black History Month, bolstered the psyches of young Black students as they learned that others, much like themselves, yet facing nearly insurmountable odds and in spite of their hardships, succeeded in helping to shape and craft America's historical legacy.

Since the celebration of Black History Month was introduced in 1976, other designated days and months, meant to celebrate this nation's ethnic populations, women and other groups, are now also part of American tradition, meant to educate and promote inclusion of those who previously may have been only marginally recognized.

As long as the minds of many within this nation are shaped by the history of the past of this nation, causing many to believe in the superiority or inferiority of others, based on their race, Black History Month will be a necessary countermeasure to address this continuing?phenomena.

The significance of these events may be argued by sociologists or historians for years to come but I believe, when a child learns of and sees evidence of those like themselves, accomplishing ordinary and extraordinary things, a foundation is laid that, if nurtured and cultivated, results in an effect that is palpable and measurable.

My oldest daughter graduated with honors from high school, among the top five percent of her class, after having carried a full roster of gifted and talented, honors and advanced placement courses her entire time in high school.

Her career goal is to become an astrophysicist, an aspiration I believe most likely would never have been envisioned by any one of our unknown, enslaved ancestors, as they gazed up at the stars in the night sky, in a strange land, far away from their native lands.

Leader must return party to its working class roots