One of the great things about democracy is the fact that ordinary people can change history through the simple act of voting.

On June 8 the British people decided to reject the appeal by Theresa May for a strong mandate to deliver Brexit. The result was predicted by nobody. Even those close to Labour Party leader Jeremy Corbyn on the day of the election expected Labour to lose rather than gain seats. A lesson for all of us.

The Conservative Party’s campaign was a disaster. The manifesto launch could not have been more badly handled. And the longer the campaign went on the more the Prime Minister's personal and political weaknesses became apparent. The surprise was the reaction of voters. Rather than voters holding their noses and staying loyal to the Conservatives they voted in large numbers for Corbyn.

There was an arrogance about the Conservative campaign which clearly offended many voters. May’s refusal to take part in television debates, the stage managed meetings and, most damagingly of all, the focus on her to the exclusion of ministerial colleagues went down like a bowl of cold sick with voters.

So we are faced with a Conservative minority government which will rely on ten Democratic Unionist Party (DUP) MPs to secure a tiny overall majority in the House of Commons. This is untenable in the longer term. There will almost certainly be another election before Christmas. 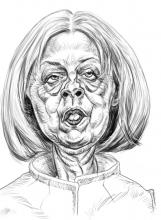 It is also hard to see how May can survive. This election has brutally revealed her shortcomings. The Conservative Party is unforgiving of failure. May and her advisers Fiona Hill and Nick Timothy will have to fall on their swords. The question is simply when.

Voters have shown that they are not prepared to be taken for granted. The assumption, for example, that former UKIP voters would all vote Conservative was wrong. This is a time for humility. We have all been proved wrong.

The one bright spot for May was Scotland. It is a delicious irony that she will rely very heavily on the support of Scottish Conservative MPs.

So an astonishing night. Voters made clear their refusal to be patronised and taken for granted. The next six months will be very difficult. This is the most dramatic political realignment in more than a generation.

On a personal note it is sad to see friends such as Gavin Barwell and James Wharton lose their seats. Politics is a brutal business.

Strong and Stable. A coalition of chaos. Two phrases that will now haunt Theresa May for the remaining weeks of her premiership.