Is it even vaguely possible that a man living in Britain today could have been pushed to the brink of murder by political debate and the political situation?

I don’t care where you come from, I don’t care who you vote for. Can you conceive of circumstances in which someone living in Britain today could be pushed to a point where they would contemplate this sort of conduct? I’m afraid to tell you that I can. I truly can. 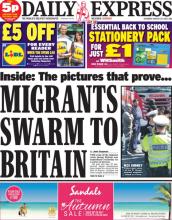 If I was to be reading my newspaper every single morning and I was being told my very existence was under siege from people I had never met or never seen but keep being told are coming here in their hordes.

If I was to open my newspaper or turn on my radio or my television set to hear that everybody coming here is a rapist and they’ve got their eyes on our women and we’ve got no chance whatsoever of protecting ourselves and unless we do this or do that or treat them like this we are all doomed and going to hell in a hand cart.

If I was being told “it’s time to reclaim our country” every time I got out of bed in the morning I’d begin to believe it, I think, if I didn’t have the knowledge and the insights and the education to know it is not true.

Convince me if you can that the political debate in Britain in the last couple of years has not created an environment in which we find it easy to believe, or it is possible to believe, that this sort of violence, this sort of terrorism could unfold on our streets.

I don’t know whether we should mention names. I really don’t…The mentioning of names is tricky on a day like today [the day after Jo Cox’s murder]. I’m going to wait. I don’t think it would be fair to focus specifically on individuals who I believe whip up the kind of hatred that may have contributed or indeed caused Jo Cox’s death. I don’t know that we necessarily want to do that. But another part of me is screaming out that you have to.

What is the point of having these conversations if we are not allowed to say what we want to express, what we fear. Why is it on days like today that people who have spent the last decade banging on about freedom of speech, and being able to speak your mind without being shot down in flames, suddenly think that everybody else who disagrees with them should shut up and go away?

What do we learn from this death if, as is being reported, it appears to have been committed at least in part for political reasons?

How dare you politicise the death of a politician who has been killed for what appears to be political reasons, say some people. It’s a mental health issue, this not an immigration issue, not a political issue.

Well, I would come with you on that journey if you tried to go down the same road when Lee Rigby was murdered by a paranoid schizophrenic. When does it become terrorism?

* This was said by James O'Brien on his LBC radio show today. He is a Fleet Street journalist and TV and radio presenter.