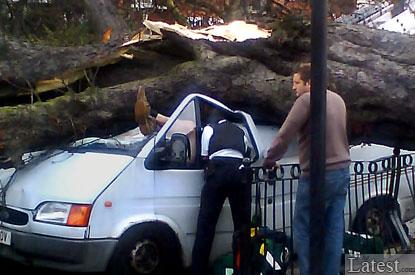 This is the scene after a driver was killed when a tree fell on his van, narrowly missing a passenger who slumped in his seat seconds before the impact.

A workman was killed and two colleagues injured when a tree crashed into their van in high winds in London UK yesterday.

The Ford Transit driver was pronounced dead at the scene and two others rushed to hospital after the large tree demolished their truck on a road at Clapham Common.

One of the men is believed to have survived only because he leaned back in his seat moments before the tree fell.

It was reported the men were thought to be builders.

Ambulance crews took a 47-year-old man to hospital with neck injuries and a 20-year-old man who was suffering back and shoulder injuries. 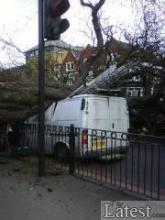 The freak accident occurred at Clapham Common at 2pm as high winds battered a line of large trees.

A BMW was also crushed in the accident but its driver was not seriously injured.

Paul Abreu, 30, of Mitcham, who was driving the BMW in the opposite direction to the van, said: "I'm lucky to be alive." One nearby office worker said: "I heard an almighty crash and I ran to the window and saw the tree was lying in the road. It was chaos. People were standing around watching."

Residents overlooking Clapham Common claim the fallen tree was a hazard and should have been cut down.

Andrew Kennedy, 58, who has lived in the area for over 20 years, said: "It has been dead for 15 years. It was an accident waiting to happen. The tree was obviously dead and should have been dealt with. It just couldn't cope with the wind."

Transport for London, which is responsible for the safety of trees along the road, said they are maintained regularly and that an investigation will be launched, with other trees checked.

A spokesman said: "Our thoughts are with the family and friends of the man who was tragically killed and also with the people who were injured." The Met Office said near gale force winds of up to 45mph moved in over London from the South Coast.

Weather forecasters said: "There were very strong, gusty winds and rain in the mid-afternoon. Trees are full of leaves at this time of year so are more likely to be uprooted.