Giant East African snails have invaded the Caribbean island of Barbados in swarms and are destroying farmers' crops of sugar cane, bananas and papayas. Islanders have asked for immediate government 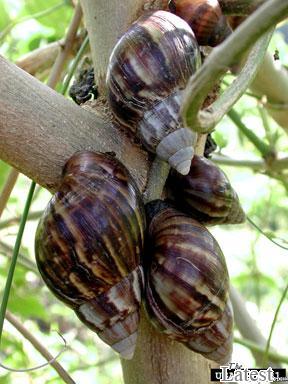 action.David Walrond, chairman of the local emergency response office said:  "We saw snails riding on each other's backs and moving in clusters."

"You're just crunching the shells as you're walking through. It's not difficult to kill them, but on a small island like this, they cannot be left unnoticed."

Volunteers have begun using government-supplied pesticides in places believed to be breeding grounds of the troublesome snails, venturing out after dark to catch them as they emerge from spending the day underground. The snails are reported to be the size of a human hand and their mucous can transmit meningitis and other diseases.

The Barbados Agricultural Society has demanded that island officials create a snail-killing task-force. Government entomologist Ian Gibbs said:  "At present the snail is regarded as an agricultural pest, but in other parts of the world it is also a very important public health pest". Originating from Kenya and Tanzania, these snails have expanded to a lot of the Pacific islands, South East Asia and the Caribbean.