Truth, bias and the BBC's coverage of Sri Lanka 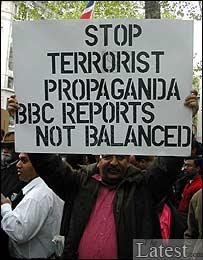 A cartoon on our office wall shows the BBC crouching low to paint whitewash on the backside of a tiger, representing of course, Sri Lanka's Tamil Tiger rebels.It appeared recently in a Sinhala-language newspaper at the same time as a number of other cartoons and columns vilifying the BBC's coverage of the rising violence on the island.

The reporting of the BBC's main English language journalist in Colombo, the state-run Sunday Observer said, was "calculated to malign" the government.

Compare that with the following: "Why do your media black out news about Tamils in Sri Lanka where the Sri Lankan armed forces are still carrying out brutal murders?" an e-mailer asks.

"I think you got some bribes from the Sri Lankan government," another mailer says.

These e-mails are part of a campaign organised by a pro-Tamil Tiger website which included bombarding the BBC with phone calls.

One is that people really care what the BBC says about Sri Lanka. It is the only international broadcaster with a permanent presence in Sri Lanka. The amount of coverage we give Sri Lanka through English language online, TV and radio reports and through the Sinhala and Tamil language services is vast compared to our competitors.

The second is that, no matter how much we strive to maintain our guidelines of impartiality and accuracy, there will always be people on either side convinced we are biased against them.

Take the cartoon about whitewashing the Tigers' backside.

That was triggered by outrage that the BBC reported that local officials had said that more than 40,000 people had fled their homes in eastern Sri Lanka after bombing by the Sri Lankan military.

We were accused of grossly exaggerating the numbers fleeing, of being naÃ¯ve and of falling for Tamil Tiger propaganda.

But the fact is, local officials did say this. And the BBC has documentary proof that the figure of homeless, 43,000 plus, came from the Sri Lankan government side.

Moreover the government carried out its own examination of transcripts of BBC reports and did not identify incidents of inaccurate or biased reporting.

An earlier pro-Tamil Tiger campaign was triggered when we carried a Human Rights Watch report accusing the Tigers of extorting money from members of the Tamil diaspora unwilling to contribute to their funds.

"This report is totally biased," was a typical comment. But this is an issue the BBC has received its own reports on, independently of Human Rights Watch.

Apart from all the above, there are some difficult problems reporting Sri Lanka.

Lots of the worst things that happen go on well away from the eyes of independent journalists.

In these circumstances, when we can't be sure for ourselves who has done what, all we can do is report what people say has happened.

In Sri Lanka that often means this: A group of people are killed, quite possibly civilians. The government and the Tigers accuse each other of the killings.

To complicate matters further, "shadowy paramilitary groups" may have been involved.

In other words, a lot of lying goes on, but unless you have the proof of who is lying, all you can do is report what the different sides say.

That can be frustrating for journalists. But for victims of the violence, and their friends and relatives, it is sometimes seen as bias on our part if we carry the denials of those accused of the attacks.

On top of all this we sometimes make mistakes. In less contentious areas, mistakes may be taken as just that.

A Sinhala demonstrator outside the BBC's offices in central London told me how the BBC website had published a "deliberate mistake" in one of its headlines.

"There is a den of activity here," Douglas Wickramaratne of the Sinhala Association in the UK said, referring to the BBC's Sinhala and Tamil language services. They are staffed, he said, by Tamil Tiger "sympathisers and activists - they openly influence some of the reporters who go to Sri Lanka."

The protests from either side will doubtless continue, just as organised campaigners seek to influence how the BBC covers other hotly disputed parts of the globe, such as the Middle East.

In the meantime we can only continue to try to give as balanced a view as we can on events, knowing that that is the main reason why so many people think the BBC is worth following.

Bug dilemma: to eat or not to eat

Why there's been a white backlash in Britain