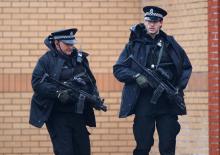 Student activism may be at risk as a result of new anti-terror rules set out by the British government, with protesters facing Public Order Offence charges if police believe them to be involved in suspicious activities.

In a compendium of new measures pushed by the Home Secretary Theresa May, universities will face significant pressure to reduce activities that could lead to ‘extremism’, including banning controversial speakers and curbing events that could lead to public disorder.

Although the bill was designed to stop the religious radicalisation of young people, in light of the 500 Britons suspected to have joined jihadist groups in Syria and Iraq, the draft bill does not specify what activities would classify as being “extreme.”

One activist who found themselves at the blunt end of the legislation was the president of Lancaster University’s student union, Laura Clayson, who told the Guardian police had photographed two signs saying “Not for Shale” and “End Israel’s Attacks on Gaza.”

“A union officer asked [the police] why the photos were being taken and was told that I was potentially committing a public order offence,” she said.

A number of academics have also expressed concern that the new rules will thwart freedom of speech and the right to protest at universities.

“A university is supposed to be a forum where people can develop critical tools that enable them to criticise the orthodoxy, and that can lead into some unpalatable areas,” said Lancaster University’s Dr Simon Mabon.

“Then we would engage with them, in lectures and in seminars where students are challenged by other students and their tutors … I don’t think it’s the government’s place to tell universities what can and can’t be talked about.”

Mabon said that while holding an event on the jihadist militia group Islamic State, many of the panelists and attendees were worried there were undercover police observing the debate, who may take their words out of context.

Student activist groups have also expressed outrage at the proposals. Tom Slater, coordinator of the Down With Campus campaign, said universities were already doing enough to screen speakers who could be seen as dangerous to university life.

“It is already difficult for students to invite a speaker who is even possibly controversial,” he said.

Earlier this month, the Home Secretary said her department had helped thwart around 40 major terror plots since the July 7 bombings, adding the threat faced by the UK was “perhaps greater than it has ever been.”