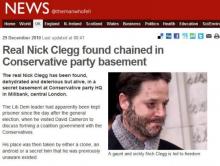 Thinking of voting in the 2015 General Elections? Think again, as your vote will not get rid of the Liberal Democrats (Lib Dems) from the Cabinet.

Whichever way you vote in the 2015 elections, you will get the Lib Dems.

“It’s almost akin to getting a ring worm lodged firmly in your lower intestine. The Lib Dem parasites latch on and come with any political party you vote for. Is there a way to get rid of them? No, is the simple answer, and a heavy dose of antibiotics just makes them latch on even more,” a Westminster insider revealed yesterday.

What have the Lib Dems achieved during the current Coalition government?

"Not much apart from a nauseating whining noise as soon as they open their suppurating mouths" said the Westminster insider.

END_OF_DOCUMENT_TOKEN_TO_BE_REPLACED

BFI London Film Festival, 2020
10 months 7 hours ago
Think Digital Summit UK & Ireland 2020
9 months 4 weeks ago
Parliament for Researchers – how to engage with the UK Parliament
9 months 3 weeks ago
James O’Brien in conversation: How Not To Be Wrong
10 months 2 weeks ago
Diwali festival, India
8 months 3 weeks ago
END_OF_DOCUMENT_TOKEN_TO_BE_REPLACED