Migrant workers are planning a labour boycott to highlight the role they play in British society in response to growing concerns over post-Brexit racism.

Matt Carr, organiser of the “One Day Without Us” event, says that as a consequence of the June referendum result, xenophobic attitudes previously lurking on the political fringes have entered the mainstream.

“We live in frightening times indeed, when government ministers can describe immigrants as ‘negotiating chips’ and threaten to ‘name and shame’ businesses that employ foreign workers, as if these workers were something shameful”, Carr wrote on the event’s Facebook page.

“It is now clear that our government has chosen to pander to fear and hate in order to manage the UK’s exit from the European Union.

“These developments not only pose a direct threat to the millions of immigrants who have made the UK their home – they have also unleashed forces that may do incalculable harm to British society itself.”

The number of attacks on foreigners and British Muslims has grown to an unprecedented degree since the Brexit result.

In June, a neo-Nazi group plastered stickers around Glasgow declaring certain areas to be a “white zone.” Stickers bearing the slogans “go home to Africa” have appeared in Cambridge, and signs saying “rapefugees not welcome” were plastered around South Shields in the north of England.

Migrants have also experienced vandalism to their homes and shops since the Brexit vote, and a Polish centre in London was targeted with anti-migrant graffiti.

In August, a gang of teenagers in Harlow beat a Polish man to death after hearing him speak his native language.

And last month, a Polish woman miscarried after being kicked in the torso by a man after he followed her to her car and allegedly assaulted her in a Milton Keynes supermarket.

Carr says his event calls on migrants and their British supporters to strike or take the day off work to emphasise the variety of work they do to benefit the UK – from owning businesses to working in the NHS. 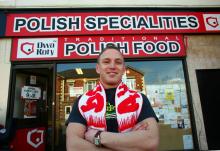 “For one day, we are inviting immigrants and their British supporters to absent themselves from the activities they normally do.

“To close their restaurants and businesses, leave classes, universities, and workplaces, and demonstrate by their absence what they have created, what they have given to British society and how essential and valuable they are,” Carr says.

He states that he also hopes employers who rely on migrant labour will support the strike and shut their businesses for the day.

More than 1,000 people have signalled on social media they will take part in the event.

The day of action is planned for February 20, 2017, which marks the UN World Day of Social Justice.

Europe must stop shifting the blame for migrant crisis

END_OF_DOCUMENT_TOKEN_TO_BE_REPLACED

BFI London Film Festival, 2020
10 months 7 hours ago
Think Digital Summit UK & Ireland 2020
9 months 4 weeks ago
Parliament for Researchers – how to engage with the UK Parliament
9 months 3 weeks ago
James O’Brien in conversation: How Not To Be Wrong
10 months 2 weeks ago
Diwali festival, India
8 months 3 weeks ago
END_OF_DOCUMENT_TOKEN_TO_BE_REPLACED