Britain’s parliamentary opposition leader has been accused of making cynical electoral calculations on the highly charged issue of race in the run up to next May’s general election.

Turning out to support his party’s candidate for the Rochester, Kent, by-election taking place later this month, which UKIP looks set to win, Miliband promised to crack down on immigration to the UK.

But, hours later, at a packed meeting of mainly African Caribbeans, Miliband did not mention immigration at all. Instead he promised that if a Labour government were elected to power in May 2015 “we will deliver a race equality strategy across every government department within a year”. 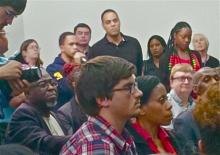 This would tackle issues like police stop and search, which was disproportionately used on Black people, and the under-representation of Black people in the judiciary and in public sector board rooms.

Miliband said this was necessary because: “We have a long way to go to deliver racial equality. I believe that no matter what your faith or background I believe you should be treated equally.”

He went on: “When you look at racial inequality it covers every department and every walk of life.”

After being given a rapturous welcome by the 300-strong audience, Miliband, took off his jacket, and began the hour-long meeting with a short introduction. He said he wanted to spend most of the time taking questions and listening to what people had to say.

He was quizzed about ways to make politics more inclusive.

Editor of the-latest.com Marc Wadsworth challenged Miliband on the hypocrisy of him speaking dewy-eyed about the historic election of four Black MPs in 1987, including the first Black woman, Diane Abbott, and sacking her from his front bench team last year.

Clearly taken aback, he said: “I think Diane is probably happier on the back bench, free to speak out. She is a great person and does huge amounts for our party.”

Miliband was gracious enough to tell the meeting Wadsworth, the former leader of the Labour Party Black Sections movement that paved the way for greater Black political representation in the 1980s, was “a trailblazer”.

Pressed by Wadsworth to introduce all-Black candidate shortlists, styled on the all-women shortlists Labour had used to great effect to redress gender imbalance, Miliband said he was prepared to talk about this with Wadsworth and others if “evolution” was no longer working.

Labour, which gets more than 75 percent of the Black vote at election time, has just one African Caribbean on its ruling national executive and half the number of Black MPs that it should have.

Miliband said “Let’s have the debate. Let’s do everything we can to try and select more Black and ethnic minority candidates. I’m open to looking at these issues; let’s have a serious look at it across the board.

With 40 percent of young Black people out of work across London, which Miliband described as “a shocking figure”, he pledged to address this issue and make sure every Government department had a strategy for delivering racial equality by the end of the first year of a Labour government.

He added: “We have a long way to go to deliver racial equality. I believe that no matter what your faith or background I believe you should be treated equally. When you look at racial inequality it covers every department and every walk of life.”

Another way he wants to get more people involved in politics is to lower the voting age to 16.

With a large group of teenagers in the crowd of people listening to him speak, Miliband said: “We need to hear young people’s voices in our politics. I think the Scottish referendum showed that we can give 16 and 17 year olds a vote.”