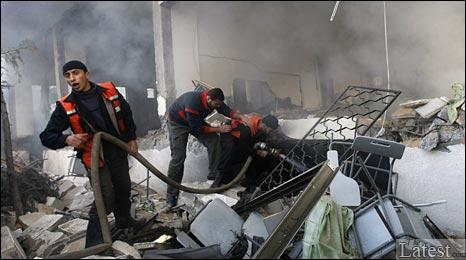 Campaigners are urging people to show support for the plight of the Palestinian people being killed by Israeli air strikes by joining protests in London. The Palestinian Forum in Britain, which demonstrated outside the Israeli Embassy yesterday, said : "As misery mounts for our brothers and sisters in Palestine, let us stand together and protest."

The Forum identifies itself as an independent institution serving the Palestinian community in Britain and promoting their issues.

On its website www.pfb.org.uk the group says it maintains the following principles:

"We aspire to reach each and every member of the Palestinian community in Britain willing to work with us in an accumulative effort of preserving Palestinian heritage and collective memory and passing it onto future generations," they said.


The Forum is also encouraging people to leave comments on a BBC news website poll which asks: "Are the Israeli air strikes on Gaza justified?"

Thousands of people in the Arab world have attended rallies to express anger at Israel's air raids on the Hamas-controlled Gaza Strip. Israeli officials say the bombing are aimed at Hamas military targets responsible for the firing of missiles into Israel.

Protesters burned Israeli and American flags in a string of Arab cities and demanded a stronger response from their leaders to Israel's "aggression".

More than 50,000 demonstrated in Egyptian cities on Sunday, the AFP news agency reported. Security officials said the biggest protest was in the southern city of Asyut.

They were led by the Islamist opposition in Egypt, the Muslim Brotherhood, the group from which Hamas first emerged.

British Foreign Secretary David Miliband has warned of a "very dark moment" in the Middle East peace process after a third day of Israeli air strikes on Gaza.

Miliband said events threatened attempts to build a "comprehensive peace" and risked fuelling radicalism. Calling for an urgent ceasefire, he said a "terrible price" was being paid for faltering peace negotiations.

Hamas says 300 Palestinians have died. The UN says 56 civilians are dead. Two Israelis have been killed by rockets. Gaza's interior ministry and more sites linked to the militant group Hamas have been hit.

The demonstration organised by the Palestinian Forum in Britain was held yesterday from 4pm-6pm outside the Israeli Embassy at 2 Palace Green, Kensington, London. The nearest tube station is Kensington High Street.

How ANC toppled president and handed power to Zuma