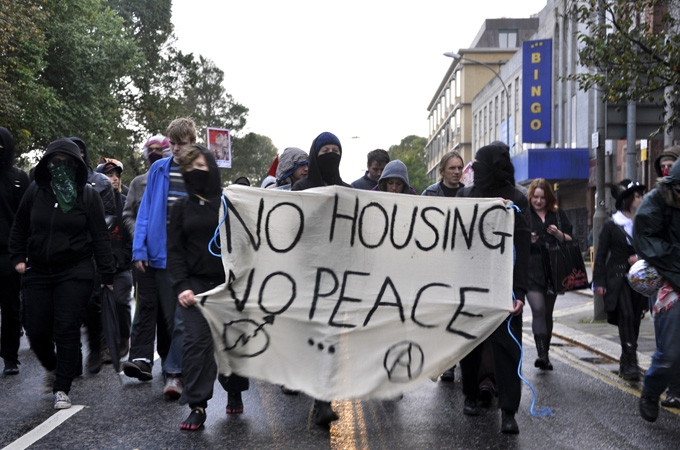 "Todd" was 18 when he came to the UK from Lithuania in 2005 in search of a better life. But things didn't work out. By 2009, with the British economy ravaged by recession, he had lost his job and had nowhere to live.

"I had really bad depression so I couldn't hold a job. I ended up sleeping rough on the streets. My mental health was deteriorating... I had suicidal thoughts," he recalls.

Todd - an adopted Anglicisation of his Lithuanian name - ended up in Brighton, a town on England's south coast with a reputation for tolerance, a vibrant arts scene and a homelessness problem. It was there that he began to rebuild his life, finding a vital support network among those squatting in the town's ample stock of empty and neglected buildings and sometimes opening them up as impromptu galleries and cultural spaces.

"I call myself houseless, not homeless. We are a community and we help each other out," he explains. "There is a lot of support and there is always somebody to talk to. Living like this, you're always in control of your own life. You don't have the money to support yourself food-wise, maybe, but you can go and get it from skips. It's still the same food."

But tens of thousands like Todd who seek shelter in unoccupied properties now risk arrest and imprisonment under a government-backed campaign to outlaw squatting.

Under a law in place since the beginning of September, squatting in empty residential properties in England and Wales is already a criminal offence, with those convicted facing months in prison and steep fines. The ministry of justice estimates that up to 2,000 people could be prosecuted each year.

Supporters of the law, including David Cameron, the British prime minister, argue that banning squatting is necessary to protect homeowners and landlords, to prevent associated anti-social and criminal behaviour, and to give the police and courts greater powers to evict, arrest and prosecute those engaged in it.

Recently, Mike Weatherley, the main architect of that legislation, met Chris Grayling, the justice minister, to discuss its extension to commercial properties as well.

Weatherley, whose Hove constituency is adjacent to Brighton, said that the law needed to be tougher because squatters were taking advantage of a "loophole" allowing the occupation of properties that were part-commercial and part-residential, such as pubs.

"The police like it, the public like it, it's a good law, and those who says it's not are just anarchists," said Weatherley. "These properties belong to somebody and the law for too long has been ineffectual."

But opponents say that the ban targets the vulnerable at a time when cuts to public services and benefits, high unemployment and a shortage of social housing mean that, for some, sleeping in a squat may be the last option before sleeping on the streets. 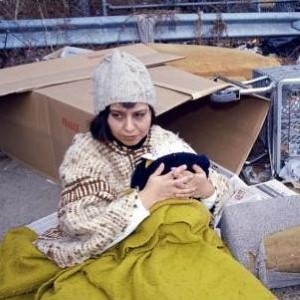 Squatting campaigners say there are also hundreds of thousands of properties being left empty and falling into dereliction even as rising rents and high property prices have left growing numbers struggling to find affordable accommodation.

"All it's doing is criminalising homeless people in the middle of a housing crisis," said Joseph Blake of the Squatters' Action for Secure Homes (SQUASH) pressure group. He cited the case of a 21-year-old man, Alex Haigh, who in September became the first person to be jailed under the new law.

"The people who are being affected are those using squatting as the final means to get a roof over their head. Alex Haigh has gone to prison for sheltering in a building that had been empty for a year-and-a-half. We think squatting needs to be there as a last resort, especially in tough times."

Homelessness in many areas of the UK has risen sharply in recent years, with the latest government figures showing more than 50,000 families and individuals in need of emergency accommodation in 2012, a 25 percent rise since 2009.

Charities and campaigners argue that the actual number of "hidden homeless", including rough sleepers and those sleeping on sofas, is much higher. Up to 50,000 people are estimated to be living in squats, including about half now illegally in residential properties, and research by the charity Crisis showed that almost 40 percent of homeless people have resorted to squatting at some point, often in bleak and squalid conditions.

"There is one squat that had capacity for 15 people and recently it was holding 45 people and this includes families and people whose English was not so great," she said. "But there's been a really lovely thing where a lot of squats have opened their doors and gone, well ok, whoever needs some space. People have been trying to stop people from ending up on the street."

Eviction Resistance, which offers advice and support to those threatened with eviction, was founded by Menezes and her partner Keith Robin, a veteran political activist who died last month at the age of 56 as a consequence of a long-term brain tumour.

"I talked to him about getting a council flat because squatting is not an easy life, but he completely refused," she said. "He felt he was either going to be taking housing off a family or squatting - that was his dilemma."

Prior to his death, Robin described to Al Jazeera how the London-based network worked to delay evictions by summoning crowds to peacefully block bailiffs and police from gaining entry to squats.

"We've found that if you are obstructive but quite amiable then police and bailiffs will cut you quite a lot of slack," he said. "You can put off an eviction, sometimes for months, sometimes only for a couple of weeks. But that's all we're doing. We're trying to enable people to have somewhere to live for a little bit longer."

Robin said that some activists also planned to target residential properties in an effort to prove the new law unworkable.

"We're going to start occupying them as a political act. And we're going to call the police and say bring it on. There are quite a lot of people who are up for that. If you push someone up against a wall and you don't give them any way out then the only thing they can do is resist."

Squatting has a long and colourful tradition in the UK and has often been associated with political activism and countercultural protest. But media coverage of the subject tends to focus on lurid stories of dreadlocked "crusties" and anarchists moving into multi-million pound Mayfair mansions, or of homeowners returning from holiday to find their properties trashed by eastern European gangs.

One such recent headline in the sensationalist Daily Mail newspaper read: "Immigration officer comes home to find family of Romanian gypsies squatting in her house, wearing her clothes and drinking her wine (after telling neighbours she'd died)".

But Casper, a Brighton-based squatter, said there were many instances of squatters playing positive roles in the communities where they lived. He said he had been involved in art galleries, social centres, a food distribution hub and an autonomous homeless shelter which had all been run by squatters.

Other notable examples include a closed public library at Friern Barnet in north London which was re-opened by squatters and re-stocked with donated books, and the Grow Heathrow project which established a thriving organic garden with local support on land earmarked for airport expansion.

"When the government is cutting all these services that people drastically need and they're saying that people should step in to fill the cracks, well, that's exactly what we're doing," said Casper.

Mike Weatherley, though, rejects the notion of the virtuous squatter, as well as any correlation between squatting and homelessness.

"Vulnerable people should be looked after by the local authorities and that is the end of it. There is no link between homelessness and squatting, no matter how they try to link the two together to get some sympathy for their cause," he said.

"Let's be clear, we're not talking about someone who is spending a night in a doorway. We are talking about somebody who is taking somebody else's property. These are anti-capitalist people and they shouldn't be able to get away with it."

But Catherine Brogan, another SQUASH campaigner, said that most squatters were simply doing what they had to to survive.