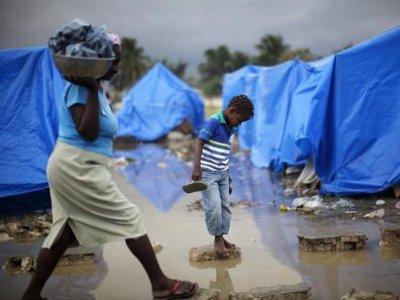 It was the unkindest cut of all. A US Agency for International Development report claims Haiti, the United Nations and the Red Cross all conspired to exaggerate the death and displacement toll from last year’s earthquake.

In doing so, it “calls into question both Haiti's financial needs and the trustworthiness of its government.” There are plenty of Americans who are predisposed to believe the slander - a libel written in oceans of blood.

The United States Agency for International Development questions how many people died in the quake and how many remain in camps for the displaced.

As if it were not enough that the U S repeatedly invaded Haiti, propped up dictators, overthrew the country’s first democratically elected president in 2004, and then appointed a government of gangsters, stole Haiti’s sovereignty to make her a protectorate of her worst enemies, then invaded the country again in 2010, under the guise of earthquake relief. After so many injuries to Haiti over so many years, the United States Agency for International Development now insults the living and the dead with a report that questions how many people died in the quake, and how many remain in camps for the displaced.

The timing of the report is quite curious, since the Haitian government is desperate to receive some of the $4.6 billion in earthquake relief pledged by international donors. But apparently, there are some in the US government that want to deny the Haitians that money. The USAID report claims that somewhere between 46,000 and 85,000 people died in the earthquake- probably more like 60,000 - while the Haitian government says 316,000 were killed. That’s about a five to one difference.

The International Organisation for Migration, which is part of the United Nations and specialises in helping displaced persons, says 1.5 million people were forced into camps by the catastrophe. But the American agency claims less than 900,000 moved into camps. Only a few months ago, in March, the International Organisation for Migration went from tent to tent, counting 680,000 people still in the camps. But the USAID report claims only 100,000 Haitians remain in camps. That’s a discrepancy of seven to one. Somebody is just too wrong to simply be mistaken. The question is who, and why.

Why would the Agency for International Development, one of the U S’ principle foreign aid dispensers, hire an opponent of foreign aid to write its report on Haiti.

Whoever wanted to question the disaster figures compiled by the Haitian government, the United Nations, and even the Red Cross, picked the right man for the job. Timothy Schwartz is an anthropologist who is vehemently opposed to foreign aid - because, he says, such aid is really designed to promote US business interests.

What’s important here is not whether Timothy Schwartz has a point about foreign aid - many on the Left would agree him, in general - but why the Agency for International Development, one of the U S’ principle foreign aid dispensers, would hire an opponent of foreign aid to write its report on Haiti. The answer is obvious, given Schwartz's well known views; he wrote a book that denounced aid to Haiti in particular. The USAID, or whoever pulls their strings, could bet on Schwartz submitting a dramatic underestimate of earthquake damage in Haiti. Schwartz would think he was doing Haiti a favour.

The Haitian government is soon supposed to take over administration of the national reconstruction programme. By throwing doubt on the actual extent of earthquake damage, the report calls into question both Haiti's financial needs and the trustworthiness of its government.

Schwartz's report is all some people need to hear, to convince themselves that Haitians are trying to scam the international donor community. White Americans, especially, are more than willing to believe such racist slander, and withhold their money from Haitian government control. This, ironically, would leave most reconstruction decisions in the hands of private US and other foreign business interests and their local elite partners - precisely the end result Schwartz claims to oppose.