Little attention has been paid in the corporate media to the anniversary of the launching of Desert Storm attacks on Iraq some 25 years ago this month. The so-called first Gulf War is now largely forgotten. And yet, it can be argued, the crisis gripping international politics today largely stemmed from this unnecessary conflict.

There was actually no Gulf War in 1991. In the way in which the term is generally used and understood, what was launched by the US-led forces was not a war at all. It was nothing less than a series of massacres.

There was no credible enemy. The Iraqi army was constantly represented in the UK and US mainstream media in the run-up to the conflict as one million-strong, the fourth largest in the world, battle-hardened after their eight-year war with Iran – and led by "monster madman", "new Hitler" Saddam Hussein.

When in January and February 1991, Iraqi soldiers were deserting in droves and succumbing to one slaughter after another, Fleet Street still predicted the largest ground battle since the Second World War. Images of enormous Iraqi defensive structures with massive fortifications and a highly sophisticated system of underground trenches filled the media. In the end it was a walkover, a rout: a barbaric slaughter buried beneath the fiction of heroic, clean, precise, "humane" warfare.

In his account of Operation Desert Storm, General Colin Powell, head of the US armed forces, estimated that up to 250,000 Iraqi soldiers had been killed. In addition, in September 1992, an international team of researchers from Harvard university estimated that 49,000 children under five had died in Iraq between January and August 1991 as an indirect result of the bombings, civilian uprisings and the UN economic embargo.

In contrast, figures provided by Lt Gen. John Yosock, commander of US troops, suggested that of the 353 "allied" deaths only 46 were killed in active service. And of those 24 (52 percent) were killed by "allied" fire (known in the euphemistic massacrespeak as "friendly fire").

The origins of the conflict are best located in the collapse of the Berlin Wall in 1989. With the decline of the Soviet Union, the US and its close ally Britain had lost their Big Enemy – so crucial for legitimising the massive waste of spending on their countries’ military/industry complexes. And so the process of manufacturing "heroic", "victorious" wars began – culminating in the big propaganda lie of US president George W. Bush and British prime minister Tony Blair about Iraqi's Weapons of Mass Destruction to justify the 2003 attacks on the feeble country. 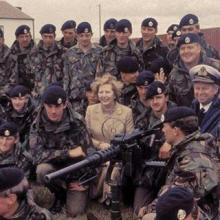 These short-sharp, spectacular, post-1989 explosions of warfare also represented significant shifts in the military strategies of Western powers. The two world wars (of 1914-18 and 1939-45) had lasted many years and brought massive casualties to the belligerent countries. Equally significant, mass participation in the war efforts brought about heightened political awareness amongst the populace and massive opposition to the powers-that-be. The First World War was the crucial backdrop to the rise of the Bolsheviks and the Russian Revolution of 1917; during the Second World War, radical, Marxist-inspired movements emerged as significant forces throughout the capitalist West – and in 1945 the supposed Great Hero of Britain’s war effort, Winston Churchill, was dumped in a landslide victory for the Labour Party.

In the US, the Vietnam War (of 1965-1973) had similar consequences – with the rise of student radicalism, Black Power, feminism and other progressive social movements.

The new, post-Cold War military adventures by the Western powers aimed to resolve the "democratic" problems posed by mass participation warfare – with the stress on small, professionalised armies attacking weak, often totally dysfunctional states. Citizens now participate in warfare voyeuristically through their consumption of the media. Hence the propaganda function of the mainstream media becomes even more crucial.

Predictably following these interventions, Western leaders such as president Bush and prime minister Blair were quick to claim victories. Since 2003, the reality has been very different: and in Iraq and Afghanistan Western interventions have ended in costly debacles.

Most of Western military strategy is now conducted in secrecy – away from the glare of a probing media – with the stress on special force interventions, the support of proxy forces and leaders, through diplomatic, trade and economic sanctions, through secret service destabilisation and through coups and assassinations of "enemy" leaders when considered necessary. The new stress on drone warfare dangerously expands this secret strategy. Today, the US is conducting shadow wars across the globe with its use of drones in countries such as Afghanistan, Iraq, Somalia, Yemen and Pakistan. According to the Bureau of Investigative Journalism and Airwars, thousands of people have been killed by US drones in these attacks since 2004. Moreover, President Barack Obama now has the right, according to his attorney general, to authorise a drone attack on any citizen anywhere if required "to protect the homeland".

There is no mainstream media outcry over this outrageous assumption of presidential power, little acknowledgement of the horrors of the 1991 Gulf massacres. But we should not be dismayed. Largely ignored by the corporate media, all around the world opposition to the Western military/industrial/media complex is growing.

* Richard Lance Keeble is Professor of Journalism at the University of Lincoln, author of Secret State, Silent Press: New Militarism, the Gulf and the Modern Image of Warfare (John Libbey) and co-editor of Peace Journalism, War and Conflict Resolution (Peter Lang).