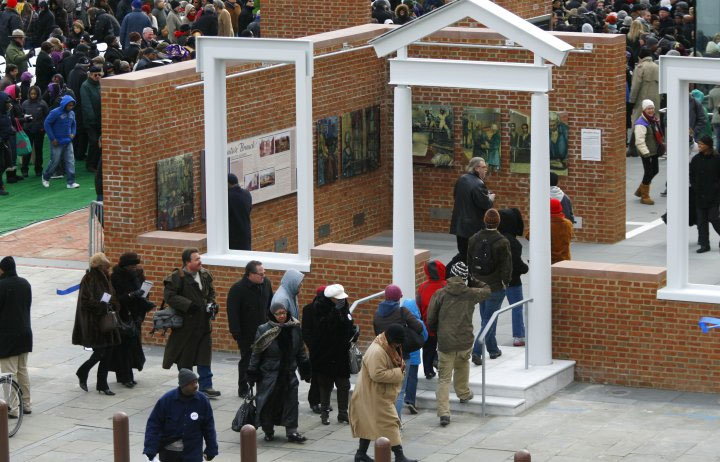 I was among hundreds gathered on 15 December,  2010 at the ribbon cutting ceremony for the United States National Park Service exhibit officially known as The President’s House: Freedom and Slavery in the Making of a New Nation.

As we listened to Philadelphia elected officials and other invited speakers address the crowd in front of the memorial, wind gusts and snow flurries tested our resolve, making the below freezing temperatures that day almost unbearable. I say almost because the majority of the crowd braced themselves against the frigid weather with stoic indifference.

The original building serving as the United States of America’s first capital, located at 190 High Street in Philadelphia, Pennsylvania, and other buildings in the area had been demolished in 1951 for the National Park Service’s planned Independence Mall State Park. According to Park Service sources, there had been a plaque that designated the existence of the President’s House outside a women’s restroom.

The President’s House/Slavery Memorial is located at the former address of the High Street house, which today is 6th and Market Streets in Center City Philadelphia. The remains of a wall of the original property, uncovered during excavation for the Liberty Bell Centre in 2002, have been enshrined at the memorial with a window for visitors to view the remains.

The High Street House was built by the estate of colonial Philadelphia mayor William L. Masters in the 1760s, a slaveholder of African people. Another colonial Philadelphia mayor, a delegate to the Continental Congress, Thomas Willing and subsequent owner of the house and Willing’s partner, Robert Morris, a financier of the Revolutionary War, were partners in the company Willing and Morris, which trafficked in African people in the slave trade. It is from Morris the property was leased for use as the President’s House.

The discovery of the remains of the wall of the President’s House in 2002 initiated the controversy regarding the memorial. When the remains of the President’s House were uncovered in 2002, as a number of historians, local leaders and citizens aggressively fought for recognition of slavery’s existence at the site and for the Nine enslaved people who toiled in the city known as ‘the cradle of liberty’, in the household of the United States of America’s first president, ‘father of his country’, much heralded Revolutionary War hero George Washington, the National Park Service had been inclined to rebury the remains.

During the Continental Congress held at Independence Hall, on April 6, 1776, a wartime halt to the importation of African people was declared. It can be argued this was done to avoid what would be the most glaring hypocrisy perpetrated by those gathered in Philadelphia; colonists discussing their believed to be “ ….unalienable rights” while continuing to import African people to America’s shores for the sole purpose of enslavement.

From the original rough draft of the Declaration of Independence, written by Thomas Jefferson, found at www.digitalhistory.uh.edu:

" .... he has waged cruel war against human nature itself, violating it's most sacred rights of life & liberty in the persons of a distant people who never offended him, captivating & carrying them into slavery in another hemisphere, or to incur miserable death in their transportation thither. this piratical warfare, the opprobrium of infidel powers, is the warfare of the CHRISTIAN king of Great Britain. determined to keep open a market where MEN should be bought & sold, he has prostituted his negative for suppressing every legislative attempt to prohibit or to restrain this execrable commerce: and that this assemblage of horrors might want no fact of distinguished die, he is now exciting those very people to rise in arms among us, and to purchase that liberty of which he has deprived them, & murdering the people upon whom he also obtruded them; thus paying off former crimes committed against the liberties of one people, with crimes which he urges them to commit against the lives of another."

The memorial rises from the footprint of the original house as an unfinished colonial brick building, including a partially framed doorway and windows, suggesting what the house will be upon completion, an ingenuous interpretation of the nation during that period since at the time of the use of the High Street house from 1790 to 1800, there were ‘structural defects’ that rendered the building of the nation incomplete, paramount among those, the continuation of the institution of chattel slavery at its founding.

Several unfinished walls of ‘rooms’ denote the location of ‘fireplaces’. Above the ‘fireplaces’ are view screen ‘pictures’ that provide video of actors’ portraying the Nine, telling of their lives at the President’s House. There are placards throughout the memorial dedicated to President Washington’s achievements, detailing the colonists’ fight for freedom, a conspicuous incongruity when juxtaposed side by side with details of institutional slavery. The founders of the nation would draft and sign the Declaration of Independence and the United States Constitution, extolling their lofty vision for attainment and preservation of freedoms not meant to be shared by all within the new nation.

The memorial is the first US national monument addressing the original colonies’ and later the nation’s enslavement of African people, which existed on the North American continent for over 400 years.

At the age of 11, young George Washington was bequeathed the first 10 human beings he would hold as property during his lifetime by his father in his will upon his death.

On Martha Custis and George Washington's wedding day in 1759, as was the custom, the wife’s holdings were relinquished to her husband. Among the Widow Custis’ holdings were enslaved African people. The people held enslaved by George Washington increased more than ten fold from 30 to 316 human beings on that day. For slaveholders within the colonies and later in the United States, one’s wealth was measured not only by land holdings but also by how many enslaved persons one held.

President Washington inhabited the President’s House from 1790 through 1797. He brought with him the Nine enslaved people immortalised at the memorial to serve the household. To get around Pennsylvania law enacted in 1780, requiring the freeing of enslaved people who had resided six months or more within the state, President Washington rotated each of the Nine back to his Mount Vernon plantation in Virginia, avoiding a full six month stay in Philadelphia and their emancipation under Pennsylvania statute.

President Washington signed into law the Fugitive Slave Act of 1793, requiring the return of enslaved persons of African descent to those presumed to own them, making it a crime to help enslaved persons escape, while residing at the President’s House.

The enslaved people held directly by Washington at the time of his death in 1799 were freed. The remaining enslaved people serving the Washington household were of dower status, having originally belonged to Martha Washington, reverting back to her to be disposed of at her direction.

It has been noted Mrs Washington was not comfortable with those remaining enslaved persons being aware that their freedom would come upon her death. She released the remainder of the enslaved persons in the Washington household the year after her husband’s death.

It has been opined the memorial’s inclusion of the history of slavery overshadows the building’s significance as the nation’s first capital where Presidents Washington and John Adams formerly resided. If it does, that is as it should be. The first American president’s history as a slaveholder, the nation’s history and that of the building itself, its owners and occupants affirm there is no doubt America’s system of chattel slavery was overwhelmingly significant in shaping the lives of all associated with the President’s House.

The time was long overdue for the nation to acknowledge the uniquely brutal institution of chattel slavery developed in the New World, which began with one to two thirds of the countless millions of kidnapped Africans, dependent upon the cargo packing method used and the month to six month duration of nightmarish voyages, surviving the Middle Passage to arrive in the New World, the nameless millions of African people consigned to lifelong enslavement, held in perpetuity for centuries, with breeding of the sons and daughters of Africa continuing for a minimum of 57 years after the ban on importation of Africans in 1808 as directed by the U. S. Constitution, denying them the freedoms so jealously coveted by the original founders of this nation and their descendants, among those “…. being life, liberty and the pursuit of happiness.”

Transcript of remarks by Philadelphia Mayor Michael Nutter at ceremony

Remarks of Michael Coard, Esq., of Avenging The Ancestors Coalition (ATAC) at ceremony

My interview with Michael Coard of ATAC

The President's House in Philadelphia, Pennsylvania

'Olympics should be about friendship not picking on China'