One of the main functions of the dominant media is to naturalise and humanise the horror of contemporary warfare.

As Edward Herman, who., with Noam Chomsky introduced the "propaganda model" concept, comments: "Doing terrible things in an organised and systematic way rests on “normalisation”. This is the process whereby ugly, degrading, murderous and unspeakable acts become routine and are accepted as “the way things are done”…It is the function of the defence for intellectuals and other experts and the mainstream media to normalise the unthinkable for the general public."

This process was particularly evident in the recent coverage of the dropping by the US military of its most powerful, non-nuclear bomb against IS fighters in Achin District, Nangarhar Province, Afghanistan. Significantly, the missile (the GBU-43/B Massive Ordnance Air Blast) was dubbed “the Mother of All Bombs” and the acronym “Moab” quickly – and unproblematically – entered the lexicon of media-military jargon. 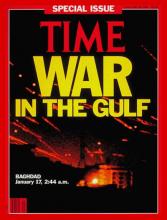 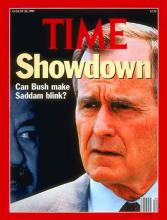 The nickname, Moab, clearly appropriates and updates the rhetoric of Saddam Hussein, former President of Iraq, who called the 1991 Desert Storm conflict “the Mother of All Battles”. In the end, up to 250,000 Iraqis were to be slaughtered by the US-led forces during those 42 days in which one massacre followed another.

But the application of the word “mother” draws on a long tradition in which the language of domesticity serves to strangely humanise the horrific. Horror, in this way, becomes a familiar part of our normal everyday lives. Mothers are normally associated with love, compassion and the creation of life. Here, the bomb delivers death and destruction. In the same way, the Hiroshima bomb was called “Little Boy”, the plutonium bomb dropped on Nagasaki “Fat Man”. Edward Teller is known as the “father” of the H-Bomb.

Brian Easlea, in his seminal, feminist history Fathering the unthinkable, of 1983, highlights the creation of nuclear weapons in the context of the masculinity of science. He sees the development of science as a process of domination over both nature and women.

According to Easlea, men create science and weapons to compensate for their lack of the “magical power” of mothering. In other words, the distorted psyche at the heart of masculinity and the “technical, phallic rationality” it promotes gives birth not to life but death. Easlea quotes a note slipped to Truman at the Potsdam conference on July 17 1945 after a successful test of the plutonium bomb that said simply: “Babies successfully born.” And the President knew precisely what it meant.

In an exultant profile of the B52 bombers during the Gulf conflict of 1991 in the Sun of 24 January, a Major Cole is quoted as saying: “The devastation underneath these babies is incredible.” In other words, the mass deaths to be inflicted by these bombers is to be a source of celebration, wonder even. Men again have given birth to massacres. A major general is quoted: “The B52 [US aircraft bomber] has a mystique about it. Because of its destructive power it has a sense of awesomeness.” 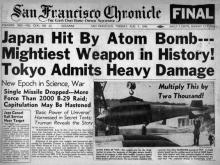 Following Hiroshima and Nagasaki, later generations (note that word) of nuclear weapons were given military status and a patriotic role. They were called “Corporal” and “Sergeant”. “Honest John” appeared later in the European theatre (another "humanising" term). The devastating “Minuteman” missile drew on the name of the heroic militiamen of the American revolutionary war who were trained to turn out at a minute’s notice. So in this way the missile takes its proud place in national folklore.

Or they have been given names of classical gods: such as Polaris, Skybolt, Jupiter, Titan, Poseidon, Trident. In these various ways weapons of mass destruction have been assimilated into our culture to appear “natural” and “civilised”.

During the Cold War, Paul Chilton (1983), drawing on George Orwell’s notion of newspeak, coined the term nukespeak. In this way, he was making three main claims. Firstly, there existed a specialised vocabulary for talking about nuclear weapons together with habitual metaphors. Secondly, that this variety of English was neither neutral nor purely descriptive but ideologically loaded in favour of the nuclear culture. And finally, that nukespeak was massively important since it affected how people thought about the subject and largely determined the ideas they talked about it.

But there was no massive conspiracy to inject this vocabulary into the culture: there were no Orwellian grammarians munching their sandwiches at the Ministry of Truth and rewriting the English language. The atomic bombs which fell on Hiroshima and Nagasaki in August 1945 were, indeed, weapons of mass destruction.

Their deployment represented, according to Chilton, a revolutionary jump in military strategy. And inevitably it heralded a new order of experience in science, politics and the everyday. Chilton commented: “The language used to talk about the new weapons of mass extermination was partly an attempt to slot the new reality into the old paradigms of our culture. It was also no doubt a language that served the purpose of those who were concerned to perpetuate nuclear weapons development and deployment.” 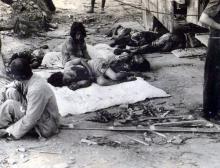 Nukespeak then, as a specific linguistic register, drew on deep patterns of symbolic thought, on myths, religious beliefs, symbols, stereotypes and metaphors which we use to organise and normalise our everyday experiences. In August 1945, politicians together with the mainstream press, spoke of the bomb mainly in terms of religious awe. For instance, while Truman was meeting Churchill and Stalin at Potsdam, an official report on the Hiroshima explosion was rushed to him.

It said: “It was the beauty the great poets dream about…Then came the strong, sustained, awesome roar which warned of doomsday and made us feel that we puny things were blasphemous to dare to tamper with the forces heretofore reserved to the Almighty.” The Times reported eyewitnesses: “The whole thing was tremendous and awe-inspiring,” said a Captain Parsons of the US Navy.

Central to the manufacture of the myth of “humanitarian” warfare over recent decades has been the constant propaganda focus on precise, clean weapons or "smart bombs". War is a civilised, humanitarian business – that’s the essential message. Significantly, to justify the use of the GBU-43/B [Mother of All Bombs], on April 13 2017, the American military afterwards said 94 IS militants had been killed in the “precise” strike. There were no civilian casualties, they claimed.

*Richard Lance Keeble is Professor of Journalism at the University of Lincoln and Visiting Professor at Liverpool Hope University, His analysis of war coverage since 1945, Covering Conflict: The Making and Unmaking of New Militarism, is shortly to be published by Abramis, of Bury St Edmunds. Richard also writes for The-Latest.com.