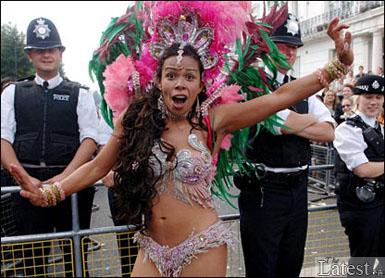 Notting Hill Carnival organisers have hitched this summer's  "wicked blast" to London's 2012 Olympic Games. They will be looking to gain a sponsorship bonanza for the premier African Caribbean holiday event. However, the alliance will be seen by many as a mere pittance.

Leaders of the largest Black cultural event in Europe should press for a new relationship between the Carnival, Olympics and the  "free market metropolis". They should demand major development projects in the five impoverished, multi-racial Olympics east London boroughs.

A portrait of the socially deprived parishes of Greenwich, Hackney, Newham, Tower Hamlets and Waltham Forest shows how this emphasis is important. Race-class and cash issues are paramount.

East London neighbourhoods are white working class in origin, Jewish in their 20th century incarnation, and now a ragout of diverse cultures and religions. Significantly, Blacks outnumber whites in two boroughs, and are heavily represented in the others.

Wages and employment remain stubbornly below the city and national average. Infant mortality rates are high and a woman in East London can expect to live 2-4 years fewer than her counterparts in the leafy affluent west London suburbs.

Corporate sponsors claim the Games will inject a dose of investment for the future in and around the sporting sites. David Higgins, chief executive of the Olympic Delivery Authority (ODA) oversees the whole operation. Four thousand new homes built for the Olympic Village will be converted later into show-piece neighbourhoods. The post-Games sports facilities will be an added bonus.

However, there no benefits are guaranteed for local communities. Unaided and powerless East Londoners of all hues will have little engagement in the  £9.3 billion Olympic budget. Most disadvantaged of all are Blacks affected by race discrimination in the grant-giving city halls, the arts council, and the corporate offices, and in the Olympic institutions themselves.

Serial failures in planning and intent have led to a drumbeat of protests. Ross Lydall, City Hall Editor for the Evening Standard set the alarm bells ringing when he challenged the damaging consequences of major urban regeneration projects. He reported that the government funded London Development Agency (LDA) spent  £1.4 billion buying and cleaning up land in Stratford. Yet, it called out the bailiffs to evict 200 small businesses who stood in the way.

The latest news reports show that Lend Lease, the preferred Olympic developer, has a track record of abandoning its contract responsibilities.

These uncaring actions disrupted crucial services. Local shops and trades -- owned or managed by Blacks, Asians and Old East Enders -- were displaced or destroyed. Shoppers were forced to go farther afield for fresh fruit, vegetables, bread and milk. This is a powerful example of the perils of the  "free market metropolis" financed and controlled by multi-national developers. The compassionate East End doctor David Widgery made this point more than a decade ago in Some Lives (Sinclair-Stevenson 1991).

Carnival-Olympics organisers face some serious questions. What measures can be taken to mitigate the social impact of development projects? Importantly, what should be done to maximise community benefits?

Instead of a one weekend deal with corporate sports and commerce, the leaders of iconic Black cultural initiatives should be mobilising political influence to turn Olympic regeneration projects in favour of the people. The prime goal is to support demands for better jobs, business opportunities and healthy environments.

They should launch partnerships to encourage Black participation in flagship economic and business projects. In such a superb location, close to the nation's financial centre, a revived East London could become a "hot city" for Black economic advancement.

A leading corporate Games sponsor has joined the chorus of approval. "The participation of small and medium-sized enterprises (SMEs) will broaden their business horizons by working on London 2012" and operate on a global basis, says Patrick Adiba, executive vice-president, Olympic Games and major events and information technology partner of the International Olympic Committee (IOC). Potentially, participating Black businesses could increase a community's wealth and ability to plan solutions to social problems.

For many people, the Atlanta Olympics1996 is a model of positive city, corporate and sporting action. Successive Black mayors, Maynard Jackson and Andrew Young ruled that corporations and city departments must commit a percentage of their contracts (at one point rising to 35 per cent) to minority-owned businesses.
However, let us be clear. Promises that a few enterprising Blacks will "get in on the action" mean nothing if the mass of their people are unable to share in the benefits. The Olympics bosses will have to show some social responsibility. Their project plans must be based on robust beneficial planning and equal opportunity policies. Lawful positive action in recruitment, training and upgrading Black workers must be implemented to make a difference.

So let us sum up. Carnival 2008 and Olympics 2012 organisers have an opportunity to level the playing fields. They have a chance to make a new connection between profit and progress for community benefit.

By action planning, now, Carnival-Olympics organisers can use the Games to check East London's decline and aid the participation of aspiring Afro-Caribbeans and Bangladeshis and old East Enders. They must open up jobs for educated youth in the finance, info-tech and media communications industries close by. Black import-export and tourist agencies can be encouraged to access nearby city airport and Eurostar train links to the continent. East London is a superb location for beneficial, community-based urban regeneration. It could be, some say, the jewel of Black British enterprise this century.


Black cultural organisers must learn to think and act on a grander global scale. By vigorously redefining the terms of the alliance, the Games can produce a world tournament that adds community development as an essential component.

This innovation would underscore the London 2012 Olympics as a true inheritor of the Olympic spirit. The winning Olympians would merit gold for modernising run-down districts. Silver goes to competitors who build affordable housing, decent jobs and schools. Moreover, a red, green and yellow medal, representing the humanity of peoples of African and Caribbean heritage, would go to projects that highlight the contributions of Black culture and teach international friendship, peace and understanding.

'Standards must be safeguarded in new age of journalism'