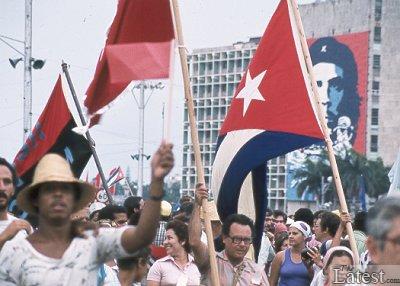 Almost everyone looks down on the Cuban communist state system. They criticise it as if it were the worst form of government on the planet. I am not a communist. But I do see communism in a slightly different way to others.

My recent visit to Cuba made me realise that the situation there is not good, but that it is no worse than ours in Britain.

The well known clichÃ©s about Cuba and it citizens, namely that  'they can't leave their own country' and    'they all earn the same amount of money no matter what job they do' is terribly unfair. But what surprises me is that Cuba hasn't yet caught the plague of the 21st century. And I do wonder how long it will be before it spreads there too.

The plague metaphorically speaking of course is consumerism, greediness and loneliness. Although it is fair enough to criticise the difficult situation in which Cuba is submerged, doesn't anyone consider other important aspects that make the island unique?

Solidarity is the key word to use to describe Cuban society.  "We may not have a lot of material things but we have something more important which are strong family links", explained a local resident in Havana.

I spoke to Manolo Jimenez, who at the age of 71 is a writer with very interesting ideas. From his point of view,  "capitalism makes people greedy; the obsession with having more and more for social approval leads us to forget about other people, even our own family".

Daily necessities make people in Cuba stick together. If you haven't got an egg to cook with, you simply ask your next door neighbour. In the UK we are so self absorbed and have so many material things that we don't really need to depend on other members of our community. The majority of people in Britain do not even know their neighbours ´ names, so it is no surprise that people can often feel lonely.

During my stay at a friend's family home, situated in a quiet, run-down area in a town called Cardenas, neighbours would come in and out of the house all the time. They would visit with their children and we would all sit in a circle on the typical Cuban rocking chairs, simply chatting away and sharing  "mamoncillos", a common fruit which people in Cuba often eat. Occasionally, there would be a big cake and ice-cream for everyone to share.

Another thing that caught my attention was how taxis are shared by many people. This is something that seems quite logical, but which is unknown in British society. We are used to having things  "all to ourselves". "Cooperation" is another word which accurately describes the Cuban way of life.

Modern western society isn't as idyllic as many make it out to be. Many family members are often isolated from one another; many reduce their contact with each other to special occasions such as Christmas or the odd weekends.

In spite of the current global financial crisis, we are still better off economically in developed countries when compared to places like Cuba. However, we do have other concerns such as solitude and too much individualism. A lot of the Cuban population complain (never too loud) about how terrible it is to live there, but they are unaware that in reality they are no less happy than we are.

I enjoyed my trip to Cuba. Perhaps it has made me realise that we don't need all that much to be content.