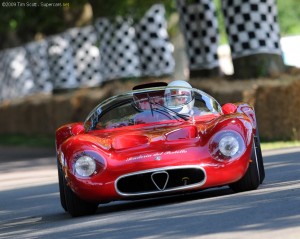 Whatever the weather in the UK, the sunshine over Goodwood House will always have its hat on.

This year's Festival of Speed (2-4 July) is no surprise. The beautiful weather was matched by a number of exquisite cars, driven by some incredible legends.

The theme for the 2010 Goodwood Festival of Speed was ‘Viva Veloce! – "The Passion for Speed", celebrating the all-consuming fascination with motor racing, and Italy’s global influence on the sport. From Alfa Romeo to MV Agusta, Ascari to Agostini, and Monza to the Mille Miglia, Italians have raced with breathtaking fervour, inspiring desire and devotion that transcends national identity.

It is very special to be at Goodwood, the 12000-acre estate near Chichester, West Sussex owned by Lord March. After an initial browse around the land, my day started with driver Ken Block at the Dunlop stand. He talked about how his gymkhana techniques in the rally cars are simply part of the course. He tried to get in as much car time as possible at the event in between training for his rally championships.

Despite many movie producers approaching him to do stunts for their films, he is reluctant to take time out and wait around for the film takes. He simply wants to drive and have fun. Block currently has four cars that he is competing in and "they all have their own characters" he says, "It’s really tricky to know which one likes to behave in which terrain".

His appearances on video-sharing website YouTube are making Block known more for his Drift and accurate techniques rather than his rally work.

Other delights included seeing Dougie Lampkin ride over a chap lying on the grass or jumping over boxes and the two helicopters performing a ‘pas de deux’ above my head, (utterly stunning completely, awe inspiring).

However, my main delight was seeing Sir Stirling Moss looking well again after his accident at home earlier this year. His best chum Murray Walker wheeled him on the lawn in front of Goodwood House as Lady Moss organised the next hurdle of getting him on the bridge over the track. He got up and walked up the steps. I was happy and so was the crowd around him.

However, as the first day of Festival of Speed drew to a close, with the late afternoon sun beating down on the golden stone of Goodwood House and the lawn around it, I looked forward to seeing the drivers who had completed their qualifying race, walk back to the drivers club and get ready for the after-party and auction.

But what proved most enjoyable was my time in the press tent where, I was sandwiched between Tony Jardine and the advertising agency for Land Rover who had been tweeting and social networking all day long. It reminded me of the Capra Film Hold the Front Page where news is wired off to all sorts of websites and newspapers.

As I walked back to my car I bumped into another photographer. We got an invitation for drinks at the Porsche mechanics’ lorry. Drinks turned into dinner and suddenly I had a new German family.  A short time later the Mercedes Mechanics turned up and a party began.

This is Goodwood. Expect the unexpected and you will always be in for a serendipitous weekend. After all, Lord March has made a deal with god.  I think it is written somewhere that “there is only good at Goodwood”

Tale of a British loser and US winner