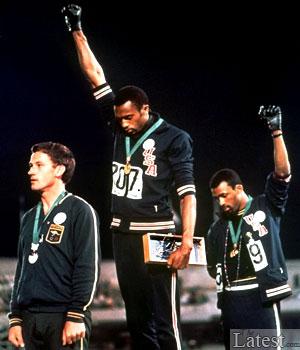 As world class athletes competed in the 2008 Olympic Games in Beijing, China, displays of strength, agility and the fruit of hard work and sacrifice were apparent. But some American athletes showed their activism with protests against China's treatment of Tibetans, the Sudanese military conflict in Darfur and calls for an end to cruel practices against animals.

Many compared their acts to the electrifying moment when Tommie Smith and John Carlos protested racial injustice in America by bowing their heads and giving a gloved Black Power salute while on the Olympic medal stand after winning the 200-meter dash in Mexico City in 1968.

In the years leading up to the Mexico City demonstration, the struggle for freedom shifted from a civil rights and integration focus to Black Power, self-determination and revolution.

As young athletes, Smith and Carlos used the Olympics as their vehicle to put justice issues and the Black revolutionary movement in the international spotlight.

In 2008, there's a deafening silence when it comes to US athletes speaking out against institutionalised racism, discrimination, racial profiling, health care disparities, mass incarceration, police brutality, poverty and the Iraq War.

"In the era when Black people in this country were simply struggling for access, Jesse Owens, Joe Louis and Jackson Robinson emerged. They kept their mouths shut, didn't raise any issues, didn't gloat in any victories, didn't seem too sad in public about their defeats, even when it was pretty clear that they were ripped off in terms of judges or decisions, and they had to do that in order to gain access," said Dr. Harry Edwards, a professor of sociology at the University of California, and a sports consultant.

Dr. Edwards mentored sprinters Smith and Carlos and other athletes in the 1960s under the Olympic Project for Human Rights, which encouraged Black athletes to speak against injustice.

During the civil rights and Black Power era, activists and athletes fought against legal segregation and for equal rights in education, employment, health care and other facets of American life and protested US imperialism and war-mongering. The turbulent time saw the assassinations of Dr. Martin Luther King Jr., President John F. Kennedy, Malcolm X, Medgar Evers, of the NAACP, Fred Hampton and Bobby Hutton, of the Black Panther Party, and the murders of others involved in the struggle.

According to Dr. Edwards, everybody was looking for the next Jackie Robinson but the generation that came afterwards produced something very different. Smith and Carlos were prototypes of Black athletes who had historically used their talents and athletic voices to make political stands for their people, he said.

They also paid a heavy price. The men, who set a world record, were stripped of their gold and silver medals, shunned by the International Olympic Committee and largely shunned by American society. Carlos' wife eventually committed suicide and Smith was forced to work at a car wash for a time.

While Smith, who went on to earn a doctorate degree in educational administration, and Carlos protested at the Olympics, basketball legend Kareem Abdul Jabbar, who converted to Islam, changed his name from Lew Alcindor in 1971, and played for 20 years with the NBA's Los Angeles Lakers, abstained from even participating in the Olympic Trials because of America's racism against Black people at home and the Vietnam War.

According to Abdul-Jabbar, not much has changed.  "Here we are 40 years later and we are once again about to send our young athletes overseas to compete in games while we send our young soldiers overseas to fight in war," he wrote in a recent blog post at kareemabduljabbar.com.

Around that same time, boxing legend Muhammad Ali was stripped of his heavyweight championship title for refusing to sign up for the Vietnam War draft because of religious and conscientious objections. During a 1969 interview on the US TV programme titled The Black Athlete, he acknowledged that many less famous people voiced objections before him.

"Black people really don't have nothing to fight for  … come back home and we fight for our own freedom and we get our heads beat up. I just don't think I should go 10,000 miles from here and shoot some Black people that never called me n----r, never lynched me, never put dogs on me, never raped my mama, enslaved me and deprived me of freedom, justice and equality, and he's Black too. I just can't shoot him," Ali said.

His actions, like many in the Black Power movement, were influenced by the self-determination and self-help teachings of Elijah Muhammad and the Nation of Islam, often through Malcolm X, which helped inspire groups like the Black Panther Party, the US organisation, the Black Congress and the Brotherhood Crusade, and the Student Non-Violent Coordinating Committee (SNCC), which later merged with the Panther Party.

During an Urban Issues Breakfast Forum, which he attended in Los Angeles before heading to Beijing, Smith presented his new book, Silent Gesture: The Autobiography of Tommie Smith and he encouraged young athletes to address the issues in their communities and not simply when they arrive at the Games.

Failure to speak out will help keep people of color relegated to second-class citizenship, said Smith. Young athletes have to be taught early by educators and school administrators through curriculum, and not just after they reach pro-status, he added.

"Inundate them with opportunities, such as coming to events to talk about themselves. We need to get them involved, almost through threats, because otherwise they're not going to do it. They will sit behind what they have, which is money, but they're in a situation now where they are so lost," Smith observed. Today's athletes don't have political and social mentors like Dr. Edwards and the Olympic Project for Human Rights, he said.

Most Black athletes realise that there is a problem and see the need for their voices, but are afraid to lose financial and social gains attached to the dollar bill, Smith continued.  "And athletes nowadays are not willing to make that sacrifice in order to be heard, so they're status quo and that's hurting their surroundings," he said.

According to Dr. Edwards, issues facing Black athletes are more complex. During the 1960s America was engaged in a genocidal war in Vietnam, while fighting to maintain segregation, inequality and depriving its Black citizens of equal opportunity under the law. US practices created an American-style apartheid. Athletes sometimes played in entirely segregated conferences and faced barriers to sports opportunities outside the locker room because they were Black, he said.

"It's no longer an issue of straightforward segregation, but it's an issue of a lack of emphasis and government intervention and so forth in communities which have in some instances substantially collapsed institutionally," Dr. Edwards said.

The phenomenal opportunities athletes have today are the result of past struggles, so there is a great deal more at stake, said Dr. Edwards.  "The money has become so big, the athlete today is literally a walking corporation, such as LeBron James, Tiger Woods, Carmello Anthony, Michael Jordan and Magic Johnson," he said.

Despite the money, the Black athlete has an obligation to remain socially and politically aware, said Dr. Edwards.  "Muhammad Ali had a heck of a lot at stake when he took his stand, and without question, so did Bill Russell when he supported various organisations, civil rights activists and marches," Dr. Edwards noted.

Dr. Edwards argued a lack of historical continuity with the methods, dispositions, orientations and attitudes of the previous generation does not mean the outspoken Black athlete will never be seen again.