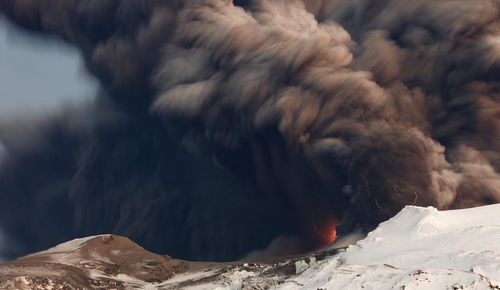 A dangerous cloud of ash from a volcano erupting in Iceland has grounded flights in and out of Europe for days, leaving thousands of people stranded - and increasingly strapped for cash.

Stuck passengers have had to shell out for hotels, restaurant meals, clothing and transport to and from the airport as they seek information on when their travel nightmare might end.

Andrew and Debbie Jackman from the UK spent more than two years saving up for their family vacation to Australia. They probably wish they'd saved a little longer.

On Friday, they found out their Qantas flight from Sydney to Britain had been cancelled. So the Cambridge couple and their two teenage sons squeezed into a 150 Australian dollar ($138) hotel room to wait out the night. On Saturday, the hotel raised the price of the same room to AU$350 - simply because it could, Andrew said ruefully. After endless negotiations, the hotel brought the price back down to AU$160, but the family, broke and frustrated, opted to move to a hostel on Sunday.

"We're at the end of the holiday so we've spent all our money," a weary-eyed Andrew said, as he sat with his family next to the Qantas customer service counter at Sydney Airport. "Because that's what you do on holiday."

In Japan, Francois Broche was down to his last 3,000 yen ($30). The 33-year-old literature and philosophy professor from Nimes, France, said he would have to call his bank at home to see if he can get his money transferred - but doesn't know how.

"I stayed in my hotel last night, but that was all my money," he said at the Narita International Airport, near Tokyo. "I think I'm going to stay here and sleep at the airport. Help me God."

Nicolas Ribard, 29, from Avignon, France, was among about a dozen stranded tourists squatting on sleeping bags that Narita airport officials had lent them. He and three other friends had about 3,000 yen between them, and were surviving on airport-issued crackers, bottled water and coupons for one free shower a day.

Their earliest possible flight would be Taiwan's EVA Airways on May 12 - but only if they are willing to pay an extra 150 euros ($200). Otherwise, they have to wait until June, Ribard said.

Airport officials came by and offered a tour of the airport to kill time.

Many stranded travellers are also fretting over lost paychecks. Tom Napier - an American stuck in Oslo, Norway, where he had been visiting a friend - said his prolonged absence from his job as a high school history teacher in Bernards, New Jersey, will "more than likely" affect his salary.

"I am a little afraid that my pay will be docked," said Napier, 35. "I also have tutoring jobs during the week that usually supplement my salary. That will be gone. And even if I don't get my pay docked, all my days off will have to be charged as sick days."

Andrew Cutter, 40, of London, who got stuck in Sweden while visiting his brother, said he will miss out on income from his job as a contractor in the events industry.

Cutter had planned to go back to London with Ryanair on Sunday, but has now rescheduled his flight for Thursday, hoping airspace will be open by then. The four days will cost him about $1,000 in lost wages.

"Really, if I'm not back by next Monday, I think it's going to be an issue," he said. "I had to buy some extra clothes today because I didn't have enough."

Steeper-than-usual hotel prices is another passenger complaint. In Hong Kong, Busi Daniel, a 39-year-old French tourist, said he spent Sunday night in a hotel after his flight was cancelled. But a huge jump in price meant he would be forced to sleep at the airport on Monday.

"Yesterday, we had a hotel room at 250 euros. At midday, it was 460 euros, and in the evening, the price was 800 euros for a room - we can't pay that," he said Monday as he waited at KLM Royal Dutch Airlines' counter in Hong Kong's airport.

The Jackmans spent hours pleading for mercy from the Novotel Sydney Brighton Beach after it raised the price of their room the second night.

Asked if the hotel was guilty of price-gouging, the hotel's general manager, Alan Burrows, said simply, "We dynamically price much like the airlines do, according to how many rooms we have to sell in the hotel."

Unlike many airlines, Qantas - Australia's largest carrier - has said it's been paying for stranded passengers' accommodations and providing meal vouchers. That was news to the Jackmans, who said airline representatives told them they were on their own.

After spending three hours on hold with Qantas, the family trekked back to the airport (another AU$30 cab ride), and spoke to a customer service representative in person. It was only then, they said, that the airline offered to pay for a hotel room - for one night.

Following queries from The Associated Press, Qantas said it planned to call the family to apologise - and to refund the money they've spent on hotels.

"We regret that the Jackmans have been overlooked in this case," spokesman Simon Rushton said.

Andrew Jackman said that was just the news his cash-strapped family was hoping for, adding that they might even do a bit of sightseeing.

"I think we can enjoy ourselves now."