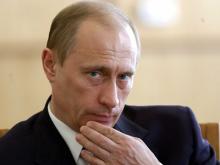 Prior to the March 16 referendum, the BBC website reported:

"Crimeans will vote on whether they want their autonomous republic to break away from Ukraine and join Russia."

The title of the news report indicated the focus: "Is Crimea's referendum legal?"

The answer: "Ukraine and the West have dismissed the referendum as illegal and one that will be held at gunpoint, but Russia supports it."

Legality was not an issue in BBC coverage of the January 2005 election held in Iraq under US-UK occupation. This was accepted on the main BBC evening news as "the first democratic election in fifty years". (David Willis, BBC1, News at Ten, January 10, 2005)

And the Iraq election was not merely "held at gunpoint"; it was held in the middle of a ferocious war to crush resistance to occupation. Just weeks before the vote, American and British forces had subjected Iraq's third city, Fallujah, to all-out assault leaving 70 percent of houses and shops destroyed, and at least 800 civilians dead. ("Fallujah still needs more supplies despite aid arrival," www.irinnews.org, November 30, 2004)

The US 1st Marine Division alone fired 5,685 high-explosive 155mm shells during the battle. The US 3rd Marine Air Wing contributed 709 bombs, rockets and missiles, and 93,000 machine gun and cannon rounds. There was much else besides, of course, and not just in Fallujah.

In the same month as the election, an Iraqi doctor, Ali Fadhil, reported of the city: "It was completely devastated, destruction everywhere. It looked like a city of ghosts. Falluja used to be a modern city; now there was nothing. We spent the day going through the rubble that had been the centre of the city; I didn't see a single building that was functioning.' (Fadhil, "City of ghosts", The Guardian, January 11, 2005)

The BBC made no mention of the argument that the deaths of 100,000 Iraqis as a result of the invasion over the previous two years made a nonsense of the claim that the election was free and fair.

The US had in fact rigged the rules to ensure US-friendly Kurds had 27 percent of the seats in the national assembly, although they made up just 15 percent of the population. In a rare departure from mainstream propaganda, Naomi Klein commented in the Guardian:

'Skewing matters further, the US-authored interim constitution requires that all major decisions have the support of two-thirds or, in some cases, three-quarters of the assembly - an absurdly high figure that gives the Kurds the power to block any call for foreign troop withdrawal, any attempt to roll back Bremer's economic orders, and any part of a new constitution.' (Klein, 'Brand USA is in trouble, so take a lesson from Big Mac,' The Guardian, March 14, 2005)

Washington-funded organisations with long records of machinating for US interests abroad were deeply involved in the election. The National Democratic Institute for International Affairs (NDI) and the International Republican Institute (IRI) were part of a consortium to which the US government had provided over $80 million for political and electoral activities in Iraq. NDI was headed by former Secretary of State Madeleine "We think the price is worth it" Albright, while IRI was chaired by Republican Senator John McCain. (Lisa Ashkenaz Croke and Brian Dominick, "Controversial US Groups Operate Behind Scenes on Iraq Vote", www.newstandardnews.net, December 13, 2004)

In January 2005, our search of the Lexis media database found that there had not been a single substantive analysis of press freedom in occupied Iraq - obviously a key requirement for a free election - in any UK national newspaper in the previous six months. The issue had simply been ignored.

The editors added: "It is in the interests of all - Iraqis, the Arabs, the US and Britain - that something workable be salvaged from the wreckage as Iraq stands poised between imperfect democracy and worsening strife." (Ibid, Guardian leader, January 29, 2005)

By contrast, a Guardian leader commented on the referendum in Crimea: "The legality of this vote is at best highly questionable: the region is under armed occupation, the Crimean prime minister was deposed when gunmen took over regional government buildings last week and, according to Chancellor Angela Merkel, the referendum is incompatible with Ukraine's constitution."

A second leader was more direct: "The referendum that took place in Crimea yesterday is both irrelevant and deeply significant. Irrelevant because it has no standing in the law of the country to which it applies, and because it took place while the autonomous region was under military occupation." 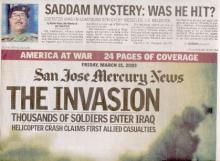 Of Crimea, the Telegraph commented earlier this month: "Russia's campaign to gain control of Crimea will culminate on Sunday with an illegal referendum conducted at gunpoint."

The editors added: "The aim of sanctions, in other words, would not be to save Crimea, but to deter Mr Putin from going further... Hence the overriding importance of making Mr Putin pay for Crimea."

What kind of nutbar working within the UK press establishment would conceive of proposing sanctions against Britain and America, or discuss 'the overriding importance of making Mr Bush and Mr Blair pay for Iraq'?

The Independent quoted David Cameron: "It is completely unacceptable for Russia to use force to change borders based on a sham referendum held at the barrel of a Russian gun."

In 2004, the Independent's reporters told readers that "democratic and free elections can bring a hope of peace" in Iraq. (Borzou Daragahi, "Bin Laden backs deputy Zarqawi and urges boycott of elections", The Independent, December 28, 2004)

A Times leader commented: "The referendum was absurdly hasty. It was conducted with Russian special forces barricading Ukrainian soldiers into their bases and regular Russian troops massing on their western border." (Leading article, "Russian Pariah", The Times, March 17, 2014)

In 2004, the same newspaper commented of Iraq: "The terrorists will do all they can to destroy democratic elections." (Leader, "Send more troops", Sunday Times, October 10, 2004)

A recent FT editorial was titled: 'Crimea poll will be divorce at gunpoint.'

The editors of the Express observed: "So Vladimir Putin has won his so-called referendum in the Crimea. It was totally predictable because it was comprehensively rigged. Those who did not wish to vote for separation from Ukraine and annexation by Russia were threatened by the columns of imported Russian thugs."

In the same month (October 2004) that the Lancet reported 100,000 deaths as a result of the US-UK invasion, the Express commented: "It is Britain and America that want to give the besieged people of Iraq their true freedom, to hold free elections and elect a democratic government." (Leader, "Nothing short of insulting", The Express, October 6, 2004)

The Mirror wrote: "The people of Crimea have a right to self-determination. But there was nothing normal about the referendum when you consider Russia had sent armed troops into the region, which remains, for now, part of Ukraine." (Leading article, "A cold sweat", The Mirror, March 18, 2014)

In 2005, the Mirror reported that Iraq was approaching 'its first democratic elections on January 30'. ("Police chief and son assassinated", The Mirror, January 11, 2005)

Michael White, an associate editor at the Guardian, wrote: "Vladimir Putin is a KGB professional who shows every sign of being a bad man, quite possibly a prodigious thief as well." 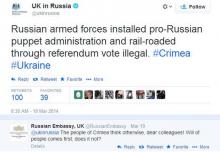 We note, first, that there has probably never been an example of a senior reporter describing a serving US or UK leader in comparable terms. White continued: "Offensive though it is to the memory of millions of Russians murdered by Hitler (far more even than his hero Stalin killed), Putin's orchestration of Crimea's defection from Ukraine offers a disturbing comparison with the German annexation of the Czech Sudetenland with Neville Chamberlain's connivance in 1938."

Again, an unthinkable comparison for "our" actions.

White added: "A Crimean referendum staged under what amounts to Russian military occupation – navy and soldiers – and boycotted by the minority Ukrainians and (12%) Tatars (expelled and butchered by Stalin) is pretty bogus."

In November 2004, as Iraq's bloodbath overflowed, as Fallujah burned, White painted a happier picture: "The elections are one issue which unites most MPs, and the anti-war Liberal Democrat foreign affairs spokesman, Sir Menzies Campbell, also stressed how "essential" it was that they are held."

White noted: "Successful elections would quieten some of the international criticism of US involvement in Iraq." 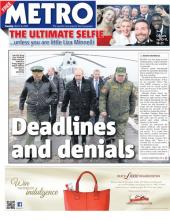 We wrote to White and confessed our discombobulation. Given the illegal US-UK invasion, the subsequent mass death, the demolition of Fallujah, how did he account for his contradictory analyses? Why had he written in terms of potentially "successful elections" in Iraq but of a "pretty bogus" referendum in Crimea? White replied on March 20: "Thanks for the note and points which I will ponder. I try to be aware of the double standards issue and think I acknowledged as much in the piece in question."

This was a surprisingly forthright and friendly reply from White who, for reasons best known to him, refers to us as "the two Lens". He of course completely failed to answer the question. But then, the propaganda system runs on unexplained silences the way an engine runs on oil.

* Suggested action: Write to Guardian associate editor, Michael White: michael.white@theguardian.com. The goal of Media Lens is to promote rationality, compassion and respect for others. If you do write to journalists, we strongly urge you to maintain a polite, non-aggressive, non-abusive tone.