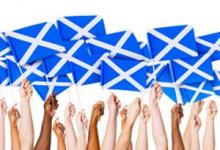 Scotland's population is changing as the number of people from ethnic minority groups continues to grow, writes Aleks Collingwood.

A sixth of Scottish households containing two or more people have more than one ethnicity represented, according to research published this week on census data.

The largest minority is “White: Other British” numbering 417,000 in 2011, an increase of 10 percent over the decade. About three quarters of this group were born in England.

Change in the census question itself has added diversity, now identifying the Polish population. At 61,000 they are the second largest minority in 2011.

Not only has Scotland’s diversity increased overall but it has increased in every local authority. Every single ward in both Edinburgh and Glasgow has seen an increase in diversity. And each minority population grew between 2001 and 2011. Several

groups more than doubled their population in a decade. 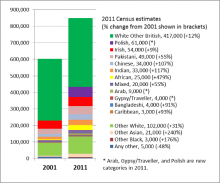 What has been happening to make the population in Scotland more diverse ethnically? Not only is there the immigration from other parts of the UK and from overseas, but as children grow up they create their own households and often move within Scotland and away from their parents.

In ethnic minority communities that have arisen through immigration, births have outstripped deaths for a number of years. This is because immigrants are usually young adults.

This sequence of immigration to cities, settlement and family building, followed by movement to new areas, has been common for immigration to developed countries for several centuries.

The briefing is part of a series prepared by the University of Manchester with support from the Joseph Rowntree Foundation. It is part of the work of the Economic and Social Research Council-funded research Centre on the Dynamics of Ethnicity and has measured changes in concentration of each ethnic group. I’m looking forward to the migration data from the Census being released so that we can look at this in more depth.