Where is our President - alive or dead? 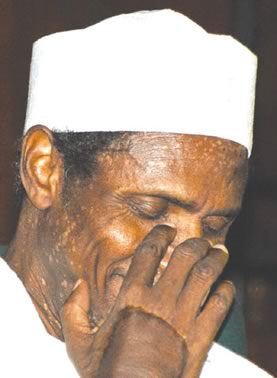 For more than 50 days, the president of Africa's most populous, oil-rich country has been in a Saudi Arabian hospital, out of the sight of his people at a testing time for them. Lamide Akintobi asks whether Nigeria's Umaru Yar'Ardua is alive or dead?

Limbo. Chaos. Better still: wahala, the Nigerian slang word for a problematic situation; one which doesn't seem to have a quick fix, one that you have no idea how to even tackle. That's what the country is going through right now.

As if being placed on the US terror watch list in December, in addition to recent deadly clashes in the northern state of Jos, as well as the continuous unrest in the oil-producing Niger Delta region, weren't enough, there's also the case of the missing president to deal with.

Yar’Adua’s absence comes at a crucial time for a country that has become a major supplier of oil to the United States and other key nations, including China.

A government amnesty with armed rebels in the Niger Delta has stalled, badly hampering oil output, and rebel groups warn that their patience is running out. The West African country has also come under fire for the growth of radical Islamist groups in its Muslim-dominated north and the fact that the man who attempted to bomb the Northwest Airlines flight over Detroit at Christmas was a Nigerian citizen.

While our vice president, Goodluck Jonathan, has begun chairing security council meetings, there are still questions about whether Yar’Adua has completed the legal transfer of power to him. In short, these are times that require strong leadership, not a lack of it.

Yar'Adua has been absent since late November 2009, when he was rushed to King Fahd Hospital, in Jeddah, Saudi Arabia, for the treatment of an unknown ailment.  His fellow Nigerians haven’t seen him since then. After a month of complaints and conspiracy theories, Yaddie, as he is affectionately called by young people like myself, allegedly granted an (audio only) interview to the BBC. But this prompted disbelief from his countryfolk. Some people even say that the voice in the broadcast was not Yar’Adua's, but someone impersonating him.

Popular opinion among many Nigerians is that he is either dead, or in a vegetative coma. The foreign minister, Ojo Maduekwe, also went on the BBC and admitted he has neither seen nor spoken to the president since Yar’Adua left the country. As though that wasn't enough to raise eyebrows, the minister went on to say he felt the country was being run perfectly fine without him.

I beg to differ. Almost nothing can be done without the president's signature/approval. There's a new chief judge whose swearing in may be illegal because the president was not present. The 2010 budget, which was taken to Saudi Arabia, may or may not truly have been signed by him, as the senator who took it there never saw Yar’Adua in person, neither did he see him sign it. Calls for the president to hand over power to the vice president are being voiced fast and furiously. But even that can't be done without an official handover procedure signed off by the president himself.

People are fed up. The youth are trying to do their bit for Nigeria but we are pushed back by the older elite who run the country. We find that the roadblocks to progress are practically impenetrable and the tangled political webs woven by the people in political and financial power make it almost impossible for any well meaning, able young person to have a pivotal position in our great nation.

So we speak and we yell and we make a lot of noise, but it seems as though nothing will change until we take Nigeria by force and push aside the old order.

With religious and political crises that would test the abilities of the best world leaders, a people in need of basic necessities, corruption endemic in most places, Nigeria needs someone to take charge; to make positive change. Yet the country finds itself in a power vacuum with no possible solution or end in sight until we find out if Yar'Ardua is alive or dead. Wahala indeed.

* Lamide Akintobi is studying for a masters in international journalism in London, UK.

* Nobel Laureate, Professor Wole Soyinka has urged Nigerians to prepare for a campaign of civil disobedience in order to force government officials and politicians in positions of authority to end the power vacuum. This follows on from a newspaper campaign by prominent politicians and others calling on the president to step down.

Soyinka said with civil disobedience, "those in government would learn to respond to the yearnings of Nigerians".

The laureate has joined civil society groups to protest about the refusal by Yar'Adua to transfer presidential powers to the vice president. Soyinka said the president's prolonged absence had pushed Nigerians close to "explosive point".

* Nobel Laureate, Professor Wole Soyinka has urged Nigerians to prepare for a campaign of civil disobedience in order to force government officials and politicians in positions of authority end the power vacuum. This follows on from a newspaper campaign by prominent politicians and others calling on the president to step down.
Soyinka said with civil disobedience, "those in government would learn to respond to the yearnings of Nigerians".
The laureate, has joined civil society groups to protest the refusal by Yar'Adua to transfer presidential powers to the vice president. Soyinka said the president's prolonged absence had pushed Nigerians close to "explosive point".
Submitted by Editor on Thu, 01/28/2010 - 22:20
Category:
Columns

Who Guards The Guardians?