A former police commander claims in court that he was demoted after he tipped the D.C. City Council about the Police Department's practice of providing escorts to celebrities, including Charlie Sheen, writes Ryan Abbott.

Hilton Burton is suing the District of Columbia, its Police Chief Cathy Lanier and other top officers in Superior Court, claiming his demotion from commander of the Special Operations Division to captain was in relation for his testimony to the City Council.

Burton states that he told the Council truthfully that the Metropolitan Police Department had a common practice of assigning officers to escort sports teams and other non-dignitaries. He claims he was called to testify after a media blitz over a police escort of Charlie Sheen to his stage show at DAR Constitution Hall. 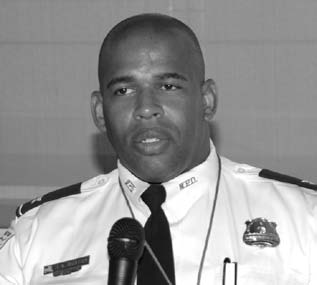 Sheen was expected to be late to his Washington show on April 19, 2011 because of court date in Los Angeles, so the event promoter arranged for a police escort with Burton's division, according to the complaint.

"That evening, Sheen's plane arrived at Dulles International Airport at approximately 8:10 p.m. Thereafter, members of the SOD conducted a police escort for Charlie Sheen to Constitutional Hall. According to Burton’s statement, “during the escort officers activated emergency beacon lights on their vehicles for safety of the escort and other drivers on the road,".

Sheen himself publicised the escort, which he said reached speeds of 80 mph while MPD police officers used sirens and sped through red lights, resulting in a media blitz that drew MPD officials in front of the City Council.

Sheen is not a party to the  law suit.

Though Chief Lanier told the public that police are not in the business of providing escorts to non-dignitaries, Burton told the D.C. Office of the Inspector General, and later the City Council, that D.C. police often provided escorts for non-dignitaries. 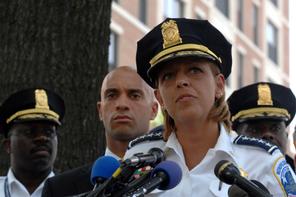 "A check of the records in the Planning Office dating back to Fiscal Year 2003 show that the practices of conducting celebrity, sports teams and other non-dignitary escorts has been in place for a number of years," Burton states that he told the City Council: "The Chief of Police was the Commander of SOD from 2002 through 2006, when the vast majority of these escorts took place and she knew or should have known about these escorts. Escorts were done for such celebrities as Hilary Duff, Billy Joel, Paul McCartney and Minister Farrakhan during the time that the Chief of Police was Commander of SOD."

Burton testified that he also told the Council that the Police Department often was not compensated for its services, as was the case when it escorted Patti LaBelle from Merriweather Post Pavilion in Columbia, Md. to the Kennedy Centre in 2011.

"Displeased with the negative publicity that the Charlie Sheen escort generated and then Commander Burton's testimony, which publicly disclosed that Chief Lanier had previously authorised many of these unregulated and unchecked police escorts, Chief Lanier retaliated against Hilton Burton by demoting him two full ranks from Commander to Captain," Burton says in the complaint.

He is seeking $3 million in compensatory damages and $3 million in punitive damages for whistleblower violations and infliction of emotional distress.

Burton is represented by James Pressler Jr., with Pressler Senftle.