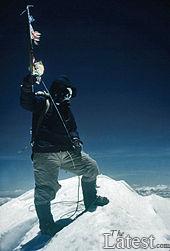 Tributes have been showered on New Zealander Edmund Hillary after the internationally most famous mountaineer's death. But, while Hillary was credited with being the first person to scale Mount Everest, the role of the Tibetan man of colour who took him to the top of the world's tallest peak was under-played.

Here The-Latest pays tribute to Tenzing Norgay often referred to as Sherpa Tenzing, the great mountaineer, without whose skills as a guide Hillary would not have achieved fame. He was photographed by Hillary as the first person to reach the summit of Mount Everest on 29 May 1953 - though the white man was given top honours for the feat in the West.

An example of the discriminatory treatment of Tenzing Norgay can be seen in the way Hillary was knighted by the British and became a 'Sir' while he was merely given The George Medal.

Tenzing came from a peasant family from Khumbu in Nepal, very near Mount Everest, which the Sherpas call Chomolungma. At the time he climbed Everest it was generally believed that he was born there, but in the 1990s it emerged that he was actually born and spent part of his early life in the Kharta Valley region in Tibet to the east of Mount Everest, but this had been kept secret for political reasons.

His exact date of birth is not known, but he knew it was in late May 1914 by the weather and the crops. After his ascent of Everest on 29 May, he decided to celebrate his birthday on that day thereafter.

He was originally called "Namgyal Wangdi", but as a child his name was changed on the advice of the head lama and founder of the famous Rongbuk Monastery, Ngawang Tenzin Norbu. Tenzing Norgay translates as "wealthy-fortunate-follower-of-religion". His father, a yak herder, was Ghang La Mingma, who died in 1949. His mother, Dokmo Kinzom,lived to see him climb Everest. He was the 11th of 13 children, most of whom died young.

He ran away to Kathmandu twice as a boy, and, at age 19, eventually settled in the Sherpa community in Too Song Bhusti in Darjeeling, West Bengal, India.

Tenzing took part as a high-altitude porter in three official British attempts to climb Everest from the northern Tibetan side in the 1930s.

He also took part in other climbs in various parts of the Indian subcontinent, and for a time in the early 1940s he lived in what is now Pakistan; he said that the most difficult climb he ever took part in was on Nanda Devi East, where a number of people were killed.

In 1947, he took part in an unsuccessful summit attempt of Everest. An Englishman named Earl Denman, Ange Dawa Sherpa, and Tenzing entered Tibet illegally to attempt the mountain; the attempt ended when a strong storm at 22,000 ft (6,700 metres) pounded them. Denman admitted defeat and all three turned around and safely returned.

In 1952, he took part in two Swiss expeditions led by Raymond Lambert, the first serious attempts to climb Everest from the southern Nepalese side, during which he and Lambert reached the then record height of 8,599 m (28,215 ft).

In 1953, he took part in John Hunt's expedition, his own seventh expedition to Everest, in which he and Hillary became the first to reach the summit. Afterwards he was met with adulation in India and Nepal, and was even worshipped by some people who believed him to be an incarnation of Buddha or Shiva.

Tenzing Norgay, said:"It has been a long road...From a mountain coolie, a bearer of loads, to a wearer of a coat with rows of medals who is carried about in planes and worries about income tax." —

Tenzing and Hillary were the first people to conclusively set their feet on the summit of Mount Everest, but journalists were persistently repeating the question which of the two men had the right to the glory of being the first one, and who was merely the second, the follower. Tenzing stressed the unity of such teams and of their achievements. He shrugged off the allegation of ever being pulled by anyone, but disclosed that Hillary was the first to put his foot on the summit. He concluded: "If it is a shame to be the second man on Mount Everest, then I will have to live with this shame."

Another interesting aside of this ascent was that all the photos that existed of the mountaineers on the top showed only Tenzing. When asked why there were no photos featuring Hillary, Sir Edmund replied, "Tenzing did not know how to operate the camera and the top of Everest was no place to start teaching him how to use it". Hillary and Tenzing remained friends throughout their lives. His son Jamling Tenzing Norgay climbed to the summit of Everest in 1996. Tenzing died of a bronchial condition in Darjeeling, West Bengal, India in 1986.

Journalists under fire across the Middle East