They included a middle aged Mormon couple, from Salt Lake City, who were my pleasant Airbnb guests on their visit to London, two stereotypically angry white males from Chattanooga in the US Deep South, at Leipzig airport, and three Bible Belt students who had volunteered in Germany to help refugees.

The latter strongly disagreed with Trump's much ridiculed plan to build a wall between the US and Mexico to keep out migrants he has xenophobically branded criminals...and get Mexico to pay.

But the two men, Jed, aged 19, and, Mike, 26, and their 18-year-old female companion, Lizzie, were vehemently anti-abortion and on  this single issue most important to them said  they would vote Trump because he was "pro life".

Bizarrely, they had been keen supporters of Bernie Sanders, standard bearer of American progressive electoral politics and diametrically different to Trump, before he came second to Hillary Clinton for the Democratic nomination to become presidential candidate.

I asked the older angry men with their Southern drawl if they were concerned by revelations their contender for the American presidency had avoided paying taxes when I bet they paid up. Nope, said their spokesman. It just showed he was a good businessman and a businessman would be better in the White House than a politician. Tell me the difference. Today a politician had to be a millionaire to be American president. 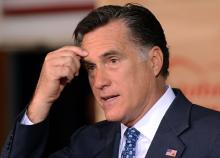 Lift engineer Mike, the two times married Mormon man, also had a beef with Washington big government and thought "Make American Great Again" Trump would give the political establishment a much needed seismic shake up.

Steve, the 26-year-old, who grew up in a  staunchly Christian Republican Texan family but said he now lived in Florida, helpfully told me Americans tended to vote on a single issue of importance to them and were often swayed to vote the same way as friends and peers.

His younger female  colleague, Lizzie, chipped in that the US media bombarded the public with too much information and people in Europe like me probably knew more about what was really going on in American politics than they did.

Well, I said, it seemed most Europeans didn't like Trump. But, an outspoken critic of NATO, because he saw it as a waste of American money, and fan of Russian strongman leader Vladimir Putin, Trump doesn't seem to like Europeans either. 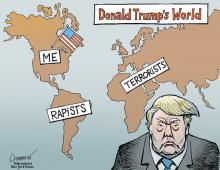 Trump has been reviled from London, Paris and Berlin to Helsinki, Amsterdam and Rome as a boorish male chauvinist pig. He hankers after a new age of American splendid isolationism.

Trouble is, my unrepresentative sample of Trump supporters did have one thing in common with most people who say they will vote for the billionaire: a dogged determination to stop at all costs dodgy Hillary Clinton becoming the Washington elite's continuity president.

And, if the populist, game-changing Brexit protest vote is anything to go by, bigoted, demagogic Trump may cause another earthquake and win next month.