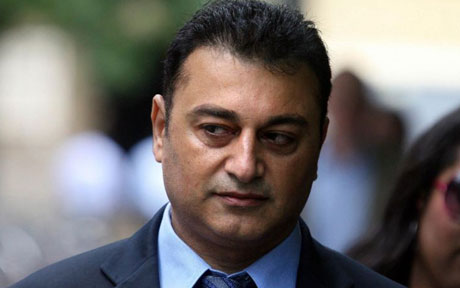 Death and disgrace. I wrote about the demise of an honorable Jamaican man called Rex Nettleford who died before his time aged just a few hours shy of 77. Now my subject is Ali Disaei whose promising British police career ended at 47 this week.

Rex was a Black Caribbean cultural icon. Ali, an Iranian-born Muslim, was a Metropolitan police superannuated, testosterone-fuelled opportunist who used race to further his own ends. I first met Ali 20 years ago. At the time he was a Thames Valley officer in leathers atop a police motorcycle. I was a Thames Television reporter finding out what traffic cops did in his area. We were both men of colour.

But Ali did not come across as a “brother”. There was not that unspoken kinship one experiences with someone on the same solidarity vibe. Hey, so what. There are Black people, African Caribbeans and Asians, who put their job before their colour. So, forgive me for expressing surprise when, many years later, I read about Ali, by then a superintendent, as a tribune of fellow Black police in London, where he was now based.

Opponents say that Ali used the “race card” to his own advantage, sailing through the ranks to the dizzy heights of commander by 2008. Supporters have a different view. They say academically brilliant Ali – he has a doctorate in law – took no hostages when fighting for Black rights in the police force and this rattled the white establishment who vowed to put him in his place.

Ali was first legal advisor, vice-chair and then president of the Metropolitan Black Police Association (BPA), founded in 1994 by Superintendent Ron Hope. Barrister Peter Herbert, who was the legal officer of the Anti-Racist Alliance, had advised Ron about how to set up the BPA, based on the ground-breaking Labour Party Black Sections model of Black self-organisation.

Peter went on to become vice-chair of the Greater London Assembly’s police committee. I have to say that I was impressed that Ali called back a Met Police civilian staff friend of mine when she got in hot water with her Scotland Yard employer and gave advice and his mobile number. What disappoints me about Ali is that he was succored by hubris.

He foiled the Scotland Yard establishment in 2003 after they spent £4m trying to frame him on corruption charges. And, by my rough calculation, Ali made at least half a million pounds in a Scotland Yard pay-out deal to settle his race discrimination case, wages and successful libel battles against powerful national newspapers like the Daily Mail, Evening Standard and News of  the World, only to be brought down by 24-year-old Waad al-Baghdadi to whom he allegedly owed a mere £300 for the design of a website. What folly.

Racially-challenged white former and current officers like ex-anti-terrorism chief Andy Hayman, a ringleader of the witch hunt against Ali, are now rubbing their hands together and crowing that the police “race” agenda, “diversity” and “political correctness” has been halted at last with Ali’s ignominious jailing for four years. They can dream on.

For the redoubtable leadership of the BPA , which has been battered but not beaten by Ali’s humiliation, still holds firmly to the view that the Met is “institutionally racist”.  Personally, I would be less polite and point the finger at individuals at the root and apex of the institution and demand to know why Black officers are more likely to be disciplined than their white colleagues, less likely to be promoted and leave the police in droves.

To his credit, Ali asked these questions. He, and the BPA, also raised the alarm about the fact that Black people are stopped and searched much more than white people, racially profiled as crime suspects by the authorities and the subject of unjust raids and arrests.

But Ali's good work was squandered in a moment of madness outside his uncle's restaurant when he egotistically thought he was not just a law enforcement officer but also the law itself. What a disgrace.

Celebrities prop up Scientology as number of defectors grows