Why pride in being African is important to students

There have been rousing protests against academic chiefs and the curriculum, based around Why Is My Curriculum White? and Why Isn't My Professor Black? This started at University College London, in the UK and has since spread to other universities.

On the second question, it's not good news judging by the title of a recent Times Higher Education Supplement report. Without pouring over the statistics offered, the title says it all: Black and ethnic minorities still have mountains to climb in higher education. 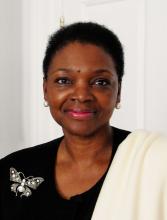 In September, Guyana-born Baroness Amos became the new director of the University of London’s prestigious School of Oriental and African Studies, making her the first African to be in charge of a British university. However, although more African and ethnic minority staff have been entering academia, they are under-represented at the top of it.

According to a Guardian article, out of 18,510 British professors – only 85 are Black.

On the matter of the curriculum, it is unfortunate, but not surprising, that it is Eurocentric. This raises serious questions and there have been Black-led moves to tackle the situation.

That said, the answer to why we have a European curriculum, is in my view relatively simple. Removing, or not highlighting, the contributions of Africans and other non-Europeans from the curriculum, helps to firmly fix in impressionable minds the notion of European superiority. 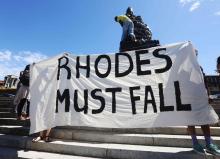 The University of Cape Town-initiated #RhodesMustFall campaign has made an impact in Britain. South African law student Ntkozo Qwabe, who won a Rhodes scholarship to come to the UK, is fighting to have the statue of Cecil Rhodes removed from Oriel College, University of Oxford, where he is studing. Qwabe says the statue depicts a “racist, genocidal maniac” who was “as bad as Hitler”.

What is more difficult to answer is why so many Africans have European names. I am not referring only to Africans from the diaspora, but also to Africans from the African continent. One sister from Nigeria, who was born in the UK, told me she was European, on account of her having a British passport. I answered that I doubt that racist National Front members would see her as European, whether or not she has that red book. 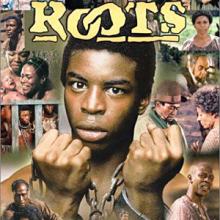 The Kunta Kinte character in the Roots television series understood the importance of names and had to be tortured before he called himself "Toby". Today some Africans from the continent of Africa are happy to have only European names, and this can be problematic.

At the What's Happening in Black British History III conference held in October, at the School of Advanced Study, University of London, I asked one of the expert presenters whether he knew about the Sons of Africa, the African abolitionists based in England in the 18th century who campaigned to end the trafficking of Africans and their enslavement. He said he knew about them, but research was difficult because of their names, which did not always suggest that they were African. It was easier to identify Sons of Africa members who had names like Ottobah Cugoano, rather than John Stuart, and Olaudah Equiano, instead of Gustavus Vassa.

Although other members of the group, like Ignatius Sancho, did not have African sounding names, they knew they were African, identified as African and called themselves the Sons of Africa. Unfortunately some of our brothers and sisters of Diasporic and Continental African parentage have difficulties accepting that they are African. 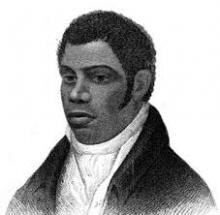 Names are very important and help to identify people without an accompanying image. The name Patel for example, suggests that the person is of Indian heritage, just as the name Adadevor, suggests that the person is of African heritage. William Cuffay is a well known Chartist leader, but a student who attended a community event said that she learnt about him from history lessons at school, but until she attended the event and saw an image of him, she had not realised that he was African. Had his name been spelt Kofi, instead of the better known corruption Cuffay, his African identity would have been obvious. 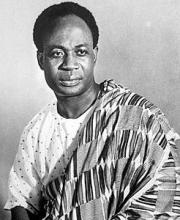 Closer to home, Ghana's first President dropped his former first name Francis, and chose to be known as Kwame Nkrumah. Tawia Adamafio, a Minister in President Nkrumah's government, who was born Joseph Tawia Adams, dropped the Joseph, and Africanised the Adams to Adamafio, a reversal of the Anglophile protagonist in Kwaw Ansah Heritage Africa feature film, who anglicised his African names to Quincy Arthur Bosomfield!

Many friends from the Continent say that they use a particular European name because it was the name of their father or mother. My answer is that the parent also had an African name, and that name could be used, or we will never break the cycle of using European names. Then there’s the matter of giving ourselves European names in the misguided view that they are "Christian names".

During the colonial and apartheid days, Continental Africans were routinely given European names by the church and school authorities. We all know the late President Mandela’s first name, Nelson, which was imposed on him on his first day at school, but few know his birth name, Rolihlahla.

In the 1970s, with the growth of Black Power and the screening of the Roots, many African Americans were moved to give their children African names. This was at a time when they were called negroes as opposed to today’s African-American term.

For those inclined to make a similar move, there are now numerous accessible resources, such as Julia Stewart’s African Names: Names from the African Continent for Children and Adults book. There’s even a move to reclaim notable personalities posthumously, by giving them an African name or correcting the corrupted spelling of their names. This is known as araning.

Two years ago The African Or Black Question (TAOBQ) campaign came up with a new concept and word: “Araning is the act of giving one’s self or someone else an African name in order to unequivocally assert their African heritage.” Thankfully, unlike Kunte Kinte, no one is torturing us today into accepting European names. As we start 2016, shall we consider African names? A Eurocentric curriculum which does not acknowledge the contribution of Africans to world civilisation, may be just as problematic as Africans with European names.

* Awula Serwah is a Black community activist and qualified lawyer.