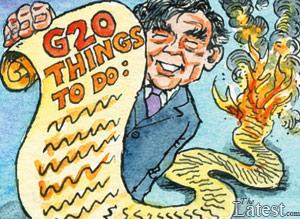 In the coming days, the world's leaders will meet to discuss the crippling problems of the current global financial crisis and how to solve it. Better late than never, I suppose.

After several months of frantic last-ditch attempts to do everything within their own countries, leaders have finally accepted that global problems need global action. Many people have been telling them this since before the worst effects of the recession took hold of the world, but leaders know best. Or don't know anything at all, as it's turned out, with countries continuing to slip up.

The worst thing is, the G20 summit is showing us a lot about ourselves. Getting together at such an important event highlights that we are not galvanised into action through the desire to do good things for people across the world and the futures of younger generations, but out of fear that if we don't do anything together at all, there won't even be a future to think about.

However, if people are getting worried about the current state of affairs, the future we are creating ourselves already could be a very troublesome environment for anyone to live in. Armed with the information handed down to us by worldwide and national governments through their mistakes and attempts to get out of economic difficulties, people are starting to truly understand the fickle nature of capitalism, the stock market, pension plans, the property/mortgage sectors and, perhaps most importantly, politics in general.

What a lot of people may not realise is that a new group of humans around the world  — those currently between the age of 0 and 25  — is the ultimate generation. Even some of the people in that group will likely not know this. Surely it stands to reason though: with the freedoms in technology, reporting, claiming information and the like... they have all of the information they need at their disposal to sort out the mess of their forefathers and stop it from happening again.

I know this sounds like a big claim but bear with me. The demographics of the UK and worldwide are set to change dramatically over the next few years through developments in technology, medicine and socio-cultural ethics.

Essentially, the real problems humanity will face will be created by recession, just not out of the debt we are left with - it will be the attitudes they gain from the whole experience that will cause trouble. If we do not work together on a much deeper level, the entire exercise exampled at G20 could be a joke.

Here are a couple of points which have frequently crossed my mind over the last couple of weeks which lead me to believe that our future is officially shafted without meaningful intervention.


Lack of a strong employment sector

The most important changes to opinions will come through employment issues. With the prediction that the British unemployment level will reach three million by the end of 2009, people have already established that a lot of these jobs were, before the tightening of purse strings, unnecessary when money is not being spent (as many industries are not conducive to the quality of life of many people when food and housing are the only major concerns).

With the population of most countries growing continually and people living longer, the working age needs to shift higher to match life expectancy. If more people can work, more people will need factories and offices to support their twilight years.

Which is a shame, considering the UK's primary industries are all but dead and everything hinges on the tertiary service industry and other invisible trades such as those operating in the City of London. The same is happening across the world too.

No support for people in later life

Perhaps unsurprisingly, pension plans have been largely exposed as a sham. Although many will focus on the boring tribulations of one or two annoying individuals like Sir Fred Goodwin, the real tragedy of pensions is that of the outright destruction of schemes due to a lack of confidence in the stock market. Investors are  — or at least were  — gambling with people's futures, which many people are happy to ignore to focus their hatred onto one or two greedy bankers.

So if there's more people needing to work, more jobs will be needed, with all pension plans having to withstand market forces such as inflation which could devalue them. Is this possible to sustain in an ultimate generation full of criticism for a boom and bust ethic?

Nope. Work won't be there, or will not meet the demand. Banks are not trusted institutions any more, so pensions will also largely fold in the private sector or, in fact, have already. The ultimate generation will face ultimate hardship unless this problem is not sorted out.


The allowance of stem cell research in medicine is already working to treat previously cureless elderly problems like Alzheimer's disease, stroke and Parkinson's disease. Other major killers are also being stopped in their tracks. More people are going to stay alive, which is great.


However, speaking over a much longer term and despite us morally doing the right thing, buzzwords such as the carbon footprint suddenly ring that little bit more true and the effects on the environment could be devastating. Demand for food will also heighten, which is a bit worrying given the climate is set to change dramatically in the next couple of decades.

It's funny, really. By the end of my lifetime, there could be the very real concept of there being a limit on children which a family can have. In even very recent years, people have criticised these ideals put forward in China, where many people are not allowed to have more than a certain amount of children. It may, rather ironically, be the only safe way to save the world as a whole in future.

So with the economy now seen as a bit of a joke and everyone generally lacking trust in individual governments, doesn't it stand to reason that we all need to get together and sort this one out?

Not to many. Here, we've seen the Tories  — a party characterised by anti-European ethics and more isolationist policies  — use the entire recession as a way to bolster their standings in the UK. Not necessarily out of real support either, just ignorance. The global crisis is being used as a way to blame the domestic government. Such is politics.

It's not all wrong though  — the Labour government have been far from the top of their game in the last year  — but it wasn't long ago when Gordon Brown would have walked a general election when he came into power. Then the CREDIT CRUNCH  — which Charlie Brooker states must be capitalised to carry more unnecessary shock factors  — hit everyone.

The laws of personality politics have distorted our view of the real issue at hand  — one that must be solved through international cooperation and not through solitary conservative politics which will, in effect, bring about the same capitalist structure which continued to grow before things got too much for everyone.

Sadly, world leaders have also used the current crisis to blame each other in a set-up more like a boxing match than an international summit. The most recent example of this mud-flinging came from Czech prime minister Mirek Topolanek, who described Barack Obama's policies as the "road to hell". Well done mate  — that's going to be comfortable this week in Prague.

Yet people need to understand that if everyone has problems, everyone must sort them out. Right-wing ethics simply will not work in this situation as the recession is already characterised by a lack of trust and confidence. Add international scapegoating and isolationism into the mix from conservative governments and it is almost certain that problems will be exacerbated.

Sadly, this brotherhood we must have to move forward in a safe world is very unlikely to happen. Many people are hung up on national identity and will likely shun their European or worldwide neighbours out of fear, ignorance or contempt.

What will likely happen at G20 is that the world's leaders will get some photos together, have a few harsh words here and there, get a scapegoat or two and then propose a so-called plan which will not be really seen by anyone. The recession will take a couple of years to see the back of through simple causality, the whole period will go in history books and we'll move on.

I just hope that the ultimate generation read these books. If we do not learn quickly that the foundations of our lives are generally shambolic, years of hard work in all sectors will be ultimately fruitless.

Through working internationally, everyone will feel the benefits. I'd go as far as to say that in a refined European structure, it could very much work. And yes, I'm openly saying that we should join Europe and, by extension, the Euro  — after all, a centralised bank powered by major Western forces would, in my view, continue to be stronger.

This is also unlikely to happen however because, dear reader, people find it very hard to make short-term sacrifices for long-term comfort and safety.

Greed, selfishness and ignorance are holding us back. It's what started the damn recession in the first place. If G20 leaders don't learn this in the next few days, they might as well have stayed at home.