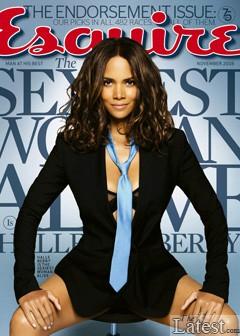 Oscar winning Hollywood actress Halley Berry has been named the "sexiest woman alive" by popular men's magazine Esquire. The 42-year-old American beauty, who has been the subject of male sexual fantasies for years, became a mother for the first time in May this year.

The father of baby Nahla is 32-year-old Canadian model Gabriel Aubry, Berry's partner of two years. The pair met while shooting a Versace advertisement in Los Angeles, California in 2005.

Berry, a former 'Bond girl', who co-starred with British heart throb Pierce Brosnan in Die Another Day (2002), won the Academy Award for her role in the grim 2001 film Monster's Ball.

The actress has said she has no plans to marry Aubry, having previously wed and divorced twice. Berry was married to former US baseball player David Justice in 1992 and singer Eric Benet in 2001, but has said she feels  "more married" to Aubry than she ever did to her former husbands.

Before meeting Aubry, Berry was frequently described as 'unlucky in love', after highly publicised stories emerged about infidelity during her marriage to Benet and she revealed she had suffered domestic abuse at the hands of a former partner. Commenting on her new title Berry told New York Daily News 'sexiness is a state of mind a comfortable state of being. It's about loving yourself in your most unlovable moments,'.

She added: "There have been some men in my life who have been wickedly sexy and have taught me much about sexual pleasure. There are a few men I should thank and others I need to forget. But I don't regret. To hell with regret. I like what I am now. I like being a mother. I like my body better since I became a mother. I feel sexier as a result of becoming a mother. I share this title with every woman, because every woman is a nominee for it at any moment."

Other 'A' list Hollywood stars who have held the distinction of "Sexiest Woman Alive" in the past few years include Angelina Jolie, Charlize Theron and Scarlett Johansson.