A new generation of young people can and must use their smartphones and social media to get out the votes that favour the peoples of the marginal abyss. It is a prospect that is literally “in their hands” writes, Thomas L Blair who outlines his five essential tips for the empowerment of UK African Caribbean and Asian communities in the digital era.

Black and minority ethnic (BME) voters could play a pivotal role in marginal seats in the British elections on May 7. And change outcomes for everyone.

“In 168 marginal seats the BME electorate is larger than the majority in which the seat was won,” says Operation Black Vote’s influential study Power of the Black Vote in 2015: Parliamentary seats and their voters.

This evidence has crucial implications for beleaguered voters in London. The 37,350 BME voters could prove this in Westminster North in London where the winning margin was just 2,126.

They could make a difference in Islington and Finsbury where they number 23,071 in a seat won by only a margin of 3569.

This crucial pattern unfolds across the nation. Derby North in the Midlands has 9,793 BME voters where the previous candidate won with a minimal 613-vote victory.

Furthermore, if the election contest is tight as the pollsters predict: “The BME electorate could influence an even greater number of seats,” says Simon Wooley, OBV National Coordinator.

On this evidence, BME voters in cities and regions could influence if not change British politics.

Chronicleworld at the British Library

Once caricatured as a “silent” and long-suffering minority, Alex Yip, chair of the British Chinese Project, urges candidates and parties “to take a courageous line against institutional racism in schools, job markets, judicial and social services".

Furthermore, the project aims “to raise the vision, rights and responsibilities of the UK Chinese community in the political arena”.

Project strategists hope this message will encourage a new generation of British Chinese leaders. “Without British Chinese in public life, full and proper representation of the community cannot be achieved,” says Yip.

Used effectively, the “stand up for your rights” message spread by social media make an ideal tool for canvassing marginal voting areas and inspiring the nation’s 500,000 Chinese.

Inter-networks of young Chinese will make sure it goes viral to politicians, police commissioners, city authorities and university chancellors.

Forget the balm of Gilead. Britain’s awakened Hindus, Sikhs, Muslims and Black Christians have gone radical and digital. On websites and social media, they call for stronger local economies, fairer housing and labour markets, improved schools, youth centres and health services. Representing millions of co-religionists, they have inserted an energising morality into politics.

“True equality, accessibility, and representation of the Hindu Community in the UK” is the goal of the Hindu Council (UK) manifesto in support of Britain’s one million Hindus,” says Sanjay Jagatia, its director.

Uniquely, organisers have put the manifesto online, using social media and emailed it to 60,000 supporters.

The Sikh Federation manifesto identifies 50 marginal constituencies in which a united Sikh vote could determine the outcome.

Amrik Singh, chair of the Sikh Federation representing Britain’s half million co-religionists, said that all parties need to commit to “effective Sikh representation in the Houses of Parliament”.

The Sunni and Shia Muslim online manifesto is clear about the politics of 2015. “End the inequality and reduce the poverty of an estimated 50 percent of Britain’s two million Muslims”.

Mohsin Abbas, one of the manifesto's organisers, says “we aim to bring Muslims and the wider community together…on a clear, common platform”.

This first serious attempt to shape a British Muslim vision is a surprising phenomenon. Lord Nazir Ahmed says: “I have been in politics for 38 years, I have never come across the Muslim community actually trying to set their own agenda.”

Active leaders of Black Christian churches say their manifesto reflects the  new focus of their 500,000 members. Changing times demand a shift from the spiritual and social needs of once immigrant people.

The new direction is to fulfil their political needs as well, affirms Dr Joe Aldred, a bishop in the Pentecostal Church of God of Prophecy, one of Britain’s Black Christian and largely evangelical and pentecostal  churches.

Focusing on marginal seats like Ealing and Croydon with 11,000 and 18,000 Black voters respectively, the Black Church Political Mobilisation manifesto is a call for action. It demands that government must deal with the problems that afflict and restrict opportunities for Black people, especially in deprived marginal seats.

"I think, if “Black and white, were to join forces...together they hold out tremendous opportunity for engagement with the political agenda of this country," says Dr Aldred in his address to the Church of England General Synod.

Thousands of eligible migrant voters are crucial for victory, especially in the 168 marginal seats, according to Migrants' Rights Network, a registered charity.

With 30,000 web visits a month, the network is the most popular online platform for migrants. Momtaz Rahman, project manager, estimates MRN has trained more than 150 migrant digital activists on political lobbying.

Their targets are a broad category of migrants: from low-paid cleaners and service workers, to teachers, artists and cultural educators to ethnic groups, women’s rights and anti-racist campaigners.

Somalis (hashtag #Somaliscount) have targeted Labour-held Hampstead and Kilburn as well as the Conservative-held Ealing Central and Acton. 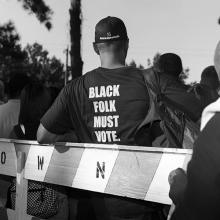 Bloggers relay the message: We want politicians who will end the hostile policies that reduce many families to poverty and welfare cuts that lead to desperation.

Some Somali tweeters get straight to the point. Migrant voters should “vote for those who will benefit you and your community”.

The West Yorkshire Racial Justice Network is the best example of pressure group online tactics. Activists represent more than 20 organisations promoting racial justice in Bradford, Leeds and across the region. They want “politicians that support increased access to decision-making and resource allocation”.

In addition, MRN affiliates  advocate a rights-based approach towards migration.

The Coalition of Latin Americans (CLAUK) rally eligible but under-served voters in Newham, Hackney and Islington.

MRN directors and trustees hope these initiatives will ensure that “Britain recognises and embraces migration as a key component of economic progress and cultural development”.

Info-savvy African Caribbean and Asian youth are shaping their role in the politics of marginality. On the evidence, the 2015 General Elections may be the time the fledglings flex their political muscles.

We know that in 2010, ethnic minorities were three times less likely to be registered to vote than white British people. Only 29 percent were contacted by any party, according to the Black Churches manifesto. But the politics of the future must not be a captive to the past. Today, young would-be-voters are driving up levels of participation in politics.

Why? Some say it is the vigour of their political DNA that drives them. They know a previous generation swept the first African Caribbean and Asian MPs into the Commons in safe Labour seats in 1987 (Diane Abbott, Paul Boateng and the “Rebel African” Bernie Grant and Keith Vaz).

Others say it is the force of dire circumstances. If they have children, they are tweeting for cheaper crèche fees and a living wage for homemakers. Young achievers are blogging for more inner city sports, community arts, and music centres in which many minority youth can excel.

Digital activists in the MAMA Youth Project they argue for open access to jobs in TV and mainstream media. Jeremy Crook’s Black Enterprise and Training Group puts the case for funded apprenticeships and further education grants. Today’s would-be-voters in the UK Youth organisation show a fresh vision rarely seen. “I support their valuable work helping young people have their voices heard by registering to vote,” said their champion, Sway, the British African rapper.

No doubt about it. The 18-to-24-year-olds have gone off traditional tweedle-dee, tweedle-dum politicians. And so they use their digital skills to support single issue and local community campaigns. They participate in Black Activists Rising Against Cuts, Operation Black Vote, the Institute of Race Relations, the George Padmore Institute and the Black Cultural Archives in Brixton.

Moreover, they go online to work for radical direct action campaigns that link communities of interest and challenge power elites such as UK Uncut, The Campaign for a Living Wage, 38 Degrees, and Save the NHS.

With these initiatives, it is easy to see how youth’s activism could be a game-changer in marginal seats across the nation.

Therefore, let's give support to the election barricades cyber-organisers, with smartphones at the ready, video clips on Drop Box and the social media in your canvassing e-bags. May 2015 could be voting youth’s “digital spring”.

Cyber-warriors must affirm that the policies of globalising cities have increased poverty and despair. Hence the need for politicians to meet their demands for change.

Second, they must be clear: the denizens of so-called 168 marginal seats are not marginal people, by neither colour, creed nor class. These are would-be-voters and communities working toward positive high-impact policies.

Therefore, people gain by choosing representatives that will successfully deal with their concrete, immediate problems and longer-term prospects.

The idea is that websites and social media, in tandem with aspiring communities, can vastly expand opportunities for the policies people want.

The “Digi-generation” must inform people, sway hearts and raise aspirations, change minds and gain political allies for both individual and communal regeneration.

Your comments are welcome.

* Thomas L. Blair is a sociologist and political blogger on the Chronicleworld 'for creative renewal in Black Britain and Afro-Europe'.